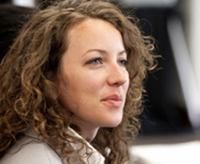 African Risk Capacity, an insurance program led by the African Union, allows African countries to pool their financial risk, uses satellite technology to monitor weather conditions across the continent. If data points to high risk of impending drought conditions, software triggers financial compensation of up to $30 million that can be used by governments for food vouchers, food-for-work programs, and monitoring of water sources.

Existing disaster relief efforts across the African continent are is not as timely and equitable as they could be, says Boyer, who is based in Johannesburg, South Africa. Distribution of resources often bottlenecks for months at a time, forcing families to sell their productive assets while they await relief.

“This new approach to disaster management is truly groundbreaking,” she says. “It closes the gap between risk and response.”

Since joining African Risk Capacity as an intern in 2012, Boyer has authored funding proposals, recruited countries to participate, and conducted feasibility studies. Most recently, she helped countries standardize their drought contingency plans.

Mary has also conducted research on development for the Bologna Institute for Policy Research in Bologna, Italy, and worked as a development coordinator for National Public Radio.

In September, Mary will move to Kabul, Afghanistan, to participate in a USAID-led initiative to strengthen local governments during the transfer of security responsibility from the U.S. Joint Forces Command to the Afghan National Army.

“When you do this kind of work you never live in one place for too long,” Mary says. “But my peace studies courses prepared me to live this kind of life not only as a skilled professional in the international community, but as someone with a vocation.”