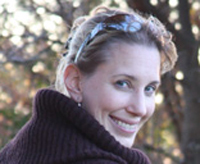 “Fundraising can be a powerful way to build peace,” says Brauer, explaining that donor support allows Habitat for Humanity to build homes and provide access to clean water, sanitation, land, and home improvement loans. “For many donors, this is a way to connect with someone else’s reality halfway around the globe,” she says.

Brauer, who majored in anthropology and peace studies at the University of Notre Dame, now lives and works in Pretoria, South Africa.

Her job, she says, requires a deep understanding of needs and injustices, a capacity for listening to diverse voices, and the ability to educate donors.

“In a single month I might be sitting on a straw mat outside a grandmother’s house in Malawi, videotaping an inspiring community in Madagascar, meeting with a donor from Cleveland, and holding a conference call with colleagues spanning 20 time zones,” she says.

Brauer, who holds a master’s degree in social work from Boston University and a certificate in non-profit management from Boston University’s School of Management, has long been dedicated to international service work. As an undergraduate at Notre Dame, she served as president of the World Hunger Coalition and was granted a summer anthropology fellowship to teach young Luo children in Kisumu, Kenya.

Before joining Habitat for Humanity in 2008, Stephanie worked as development coordinator for Grassroots International, an organization that supports community-led initiatives and social movements worldwide. She helped educate U.S.-based activists and donors about the power of grassroots social change and raised funds for efforts such as the Landless Worker’s Movement in Brazil and an urban rooftop gardens project for Palestinian families in Gaza.