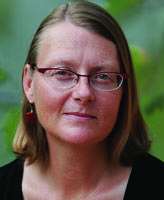 In the book, Doss examines the contemporary American propensity to honor significant events by creating public memorials, from makeshift, roadside shrines to permanent structures such as war memorials and those erected at the sites of major terrorist attacks. Thousands of new memorials have been constructed in the last two decades alone.

Doss argues that this behavior is driven by public feelings of grief, gratitude, fear, shame, and anger—as well as struggles over self-definition, national purpose, and the politics of representation.

A Culture of Commemoration 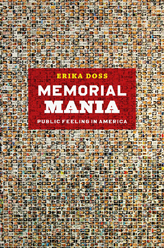 “The entire country is participating in what I title memorial mania—an obsession with issues of memory and history, and also of telling a story,” she says, adding that “[people are] trying to come to closure about really difficult events like 9/11.’”

Although her book covers a wide variety of memorials and the feelings that inspired them, Doss says she first became interested in this phenomenon after observing the memorials the public erected at the sites of two tragedies: the 1995 bombing of the Oklahoma City federal building and the 1999 shooting at Columbine High School outside Denver.

To begin her research, Doss started by asking herself some basic questions:

Doss, who was teaching at the University of Colorado, Boulder, when the Columbine killings occurred, says she then spent quite a few days at the massive shrine created there looking for answers.

She conducted similar research on the public mourning process at the site of the Oklahoma City bombing.

“I went there several times from 1995 on and watched people as they literally took off their t-shirts and took off their hats, signed something on it, and put it on the fence,” Doss says. “They did it with teddy bears, or medals, or all kinds of things, and I became fascinated with how we make these connections between objects, our feelings about certain events, and commemoration.”

An Opportunity for Storytelling

Doss says she is delighted to have been honored for Memorial Mania. “The first article I published was in the Journal of American Culture, which is published by the Popular Culture Association/American Culture Association,” she says. “It’s really nice to be recognized by an organization that published my first article, and I’ve delivered a few papers at their conferences over the years, so I’m really pleased by that recognition.”

Doss is currently working on her next book, Picturing Faith: Modern American Artists and Religion, which explores American artists and the influence their religious beliefs and practices had on their art.

One of the things she enjoys most about her area of scholarship, Doss says, is the opportunity to do fieldwork and share stories. With an expertise in art history and American studies—focused on the 20th and, now, 21st century—she says working on the memorial mania project was a natural progression from her past research.