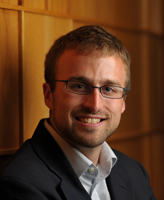 Sudan has been torn by religious, social, and economic strife for decades. Seeking to ease these tensions, the Sudanese people voted to divide the country in two—north and south. But the referendum has left a host of unresolved issues in its wake.

Through the Office of the U.S. Special Envoy to Sudan, Peter Quaranto ’06 is working with the African country’s residents to help reach a successful and sustainable resolution to the division.

“The referendum is not the final chapter of the Comprehensive Peace Agreement in Sudan,” he says. “There’s still a lot of work that has to be done to facilitate good relations between the north and south and to deal with their internal challenges.”

As part of the special envoy, Quaranto is confronted with a variety of responsibilities.

“When I’m in the field, I engage with the parties and try to encourage them in their negotiations and persuade people to be more flexible on different positions,” he says. “When I’m in D.C., there’s a lot of writing strategy papers, providing memos to brief the U.S. government on what’s happening in Sudan and what our policy should be—and also providing materials for the Secretary of State, the White House, and other senior U.S. officials who are meeting with Sudanese leaders.”

Quaranto shared some of his insights into Sudan during a March 2011 visit to Notre Dame, when he participated in a panel discussion called Sudan After the Referendum: What Happens Next? The event was cosponsored by the Center for Social Concerns and the Kroc Institute for International Peace Studies.

A former student at the Kroc Institute, Quaranto says his interest in activism and policy work dates back to his first year at Notre Dame, just after the Iraq war began.

“I recall feeling very strongly at the time that I and other students had to take a stand,” he says. “I joined with other students in trying to engage the campus in a debate about the merits of it, what U.S. policy should be, and what the role of U.S. citizens ought to be during a time of war.”

His interest was also piqued by his involvement in the University’s Center for Social Concerns, which exposed him to “different local and global political realities.” These experiences inspired Quaranto to major in political science and peace studies in the College of Arts and Letters.

“I wanted to go into the classroom and think through and grapple with the tough questions,” he says. “I realized that if I was going to take action, I had to have informed positions, and I needed to really educate myself about the field of political science.”

After studying in Uganda as a junior, Quaranto co-founded the grassroots activist group Resolve Uganda with Michael Poffenberger , ’05, who still runs the organization today.

Quaranto, a Marshall Scholar, then went on to earn advanced degrees from University of Bradford and University of Oxford before returning to the United States to work on Capitol Hill. In August 2010, he joined the U.S. Special Envoy to Sudan, part of the Obama administration’s efforts to find diplomatic solutions to the problems facing Sudan.

Quaranto says his Notre Dame education prepared him well for the challenges he faced in graduate school and in his professional life.

“Through the experiences I had here, I was forced to confront realities that are very different from my own,” he says. “That raised a lot of different questions about what it meant to be a citizen, to be a part of a local community, and to be part of a global community.”

His professors also stressed the importance of thinking critically about such questions and expressing his thoughts clearly—particularly through writing, Quaranto says. “I was able to really develop stronger writing skills, which is something that I use everyday in my current job. If I didn’t have that ability, it would be very difficult.”

Moreover, he says, his experiences showed him the value of taking action.

“The people that I’ve worked with who are employers in international diplomacy are not just looking for people who are smart,” Quaranto says, “but also for people who make things happen, who look at a situation and connect dots, build coalitions, and try to transform dynamics.

“In addition to all the skills—writing, communication, and technical—there’s also this ability to be proactive and be an agent of change that can’t be overstated.”