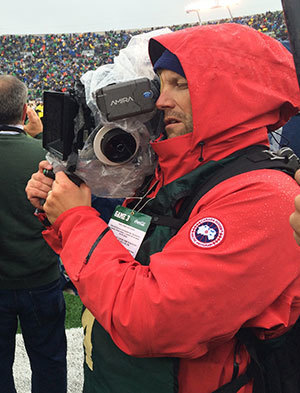 Greg Kohs ’88 will wait as long as it takes to earn the trust of his film’s subjects.

Kohs, who majored in American studies in the College of Arts and Letters, makes his living directing television commercials and independent documentaries.

The journey to the film’s premiere took seven years, roughly half of which were filled with Kohs convincing Mackey to share his story in a feature-length documentary.

Kohs, who won 10 Emmy Awards while working at NFL Films, got the idea for the documentary in 2008. He was making a series of short films for Nike and the Livestrong foundation celebrating cancer survivors, and Mackey was one of the subjects. Kohs soon realized he wanted to spend more time chronicling Mackey’s life.

Kohs related to and connected with Mackey—in large part, he said, thanks to the sense of compassion and empathy that was fostered among faculty and students during his time in college.

“Through a lot of the qualities I honed and discovered at Notre Dame, I was able to pick up that there were aspects of his life story—things that didn’t have to do with cancer—that were worth exploring,” Kohs said.

An Alaska native, Mackey comes from a family of sled dog racers—both his father and brother won the Iditarod Great Sled Race, a 1,000-mile competition between teams of 16 dogs and a musher.

Mackey’s quest to follow in their footsteps was derailed by his 2001 throat cancer diagnosis and subsequent surgery and radiation. Nevertheless, he returned to racing in 2002, winning another grueling race, the Yukon Quest, four times.

He then won the Iditarod every year from 2007 to 2010—the first person to ever capture four titles in a row.

Mackey also had a somewhat contentious history with his father, and Kohs planned to focus his film on the dynamics of that relationship.

“I wanted to tell a family story,” said Kohs, whose previous films include Song Sung Blue, a documentary—championed by the late film critic Roger Ebert—about a husband-and-wife Neil Diamond tribute band. “Everyone gets what they get out of the film. For me, the father-son dynamic was very strong.”

But before Kohs could make a movie, he needed the subject’s blessing.

Initially, another filmmaker had the rights to Mackey’s story. Once they were up for grabs, Kohs had to convince Mackey to trust him with making the film—a process that took about three years.

Kohs spent two months shooting footage, detailing Mackey’s family story and his battle with cancer. Mackey is currently in remission, but his treatments cost him a finger, all of his teeth, and caused circulation problems.

That Mackey overcame cancer and continued as a champion sled dog racer is part of what makes his story compelling, Kohs said.

It’s also why, when Kohs’ film was awarded the prize in Seattle, he was happiest for his subject.

“I felt great for Lance, more than anything,” Kohs said. “That his story was recognized as being award-winning.”

The film will continue playing at festivals throughout the fall.