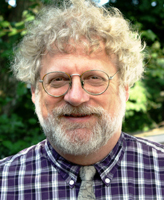 Jim Greene ’85 is a homelessness policy adviser for the Boston Public Health Commission and director of the Boston Emergency Shelter Commission.

While finishing up his undergraduate degree in the College of Arts and Letters, Greene ’85 was about to apply to graduate school when Weber suggested he take a break from higher education.

“Why not consider the Peace Corps, the army, or even harvesting grapes in France?” Weber said. “You’ve been in school all your life. Try something else. You can always go back to grad school after that.”

Through his undergraduate studies and opportunities at the University’s Center for Social Concerns, Greene had already spent a summer teaching on the Oneida reservation outside of Green Bay, another summer serving at Hope House in the St. Thomas Projects in New Orleans housing, and had strong ties to the Glenmary Farm in Vanceburg, Kentucky, where he helped disadvantaged Appalachian residents. Upon graduation, Greene heeded Weber’s advice and returned to Kentucky.

A Path in Service

Twenty-seven years and counting after his conference with Weber, Greene, who double majored in American Studies and English, reports that while he never went to graduate school, his Arts and Letters undergraduate degree has served him well in his work in counseling, outreach, and program and policy development with homeless adults and families in Boston.

His hard work has not gone unnoticed. In 1999, The Philanthropic Initiative named him a Boston Neighborhood Fellow, an honor that “recognizes individuals of unusual creativity, vision, and initiative” who quietly work to improve the community.

“Jim builds bridges and helps forge connections,” his nominator said. “He is very generous and offers what he can by way of resources, a deep understanding of the streets, and—perhaps most importantly for the people he befriends—time.” 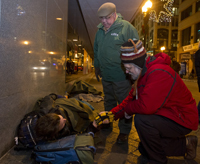 In 2003, when Mayor Thomas M. Menino appointed him to his first official post in Boston, Greene was already an expert on homelessness issues. He had spent 16 years at Pine Street Inn, a nonprofit that provides shelter, job training, and support services to homeless Boston residents.

His meandering, bottom-up career path differs from students who took internships with government officials, worked on political campaigns or did community organizing. Greene got to city government through his work with the homeless.

“Many people get involved in public policy because they know people in high places,” he says with a chuckle. “I got to the Mayor’s office because I knew high people in low places—the alcoholics, drug addicts, and mentally ill adults on the streets on Boston.”

By assisting with Boston’s annual homeless census, he got to know Mayor Menino and saw first-hand his administration’s commitment to doing more for homeless adults and families in need. Over the past decade, many calls for service have come directly from Menino or his senior aides, “because homeless people approach him directly when he is out in the community,” says Greene.

Today, Greene continues to “fight the good fight” as a homelessness policy adviser for the Boston Public Health Commission and director of the Boston Emergency Shelter Commission. His role has shifted from direct service to improving systems and policies: his department coordinates the city’s annual homeless count, and his staff work with other city and social service agencies to coordinate the city’s response to homeless families and adults in crisis.

Between referrals from the mayor’s hotline that bring daily contact with the many socio-economic challenges poor people face, and Boston’s commitment to robust and effective public health, shelter, housing, and addiction treatment programs and partnerships, Greene still feels close to the lives of people in need.

“On the municipal level, public policy still has a human face. When someone loses their housing, or access to services or treatment is cut, city officials know the face and name of the people who bleed.” While good data informs effective policies, “you can never allow yourself to get numbed by the numbers,” Greene adds.

During his undergraduate years, Greene says Weber was just one of several professors who served as “midwives” to his career.

Another of his intellectual inspirations was Kathleen Maas Weigert, a former associate professor in American studies and fellow of the Joan B. Kroc Institute for International Peace Studies, who helped him understand the multiple and complex causes of societal challenges, something Greene referenced even recently in a speech he gave at Tufts University’s Friedman School of Nutrition.

“She taught me about peace movements and homelessness and engaged in what today is called service learning,” Greene says. “Like many of her colleagues, she was not just teaching but also learning with us that social activism and academic interests could converge.”

Greene also extols the College of Arts and Letters’ emphasis on seminars that bring together students with different academic and career interests. “So much of my work is a mix of activism and advocacy,” he says, “Notre Dame’s emphasis on thinking critically with peers, writing well, and communicating effectively established a foundation for my career as an advocate.”

Even though he never made it to graduate school, Greene has a feeling Weber and the other faculty who made their marks on him during his time at Notre Dame would approve of his choices. He says he especially thinks of the late Thomas Stritch, whose course “The American Experience” Greene likens to “listening to your grandfather telling stories.”

To explore urbanization and the rise to power and social standing of immigrant communities, Stritch had his students read Edwin O’Connor’s, The Last Hurrah, a novel based on legendary Boston Irish Mayor James Michael Curley. Greene thinks Stritch would have been keenly interested in his decade working for Menino, Boston’s first-ever Italian-American and longest-serving mayor.

“Some people say a liberal arts education doesn’t prepare you for anything, but I think it prepares you for everything.”

Photo of Jim Greene in action courtesy of Matthew Lee/The Boston Globe staff. This copyrighted photo is used with permission and is not for further distribution.