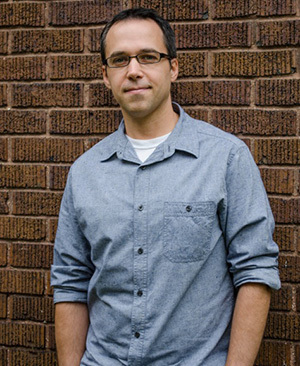 Jeff Spoonhower ’99 has been appointed assistant professor of film and digital media production in Notre Dame’s Department of Film, Television and Theatre (FTT) after two years as a popular visiting faculty member in the department.

A 12-year veteran of the video game and animation industries, Spoonhower shares with students the very same production techniques and tools he uses in his award-winning professional work.

“We’re delighted that Jeff is joining our faculty,” said FTT Professor Jim Collins, chair of the department. “As a former major, he’s keenly aware of our traditional strengths in production, but he’s also expanding our curriculum in digital media design. And as a visiting faculty member, he’s demonstrated that he’s an inspiring teacher.”

From VHS to 2K Games

Spoonhower grew up with art and music, taking studio art and painting classes, and participating in a variety of musical endeavors throughout grade school, junior high, and high school.

“I also loved making home movies with my friends on the weekends,” he said. “We used to run through the woods with a VHS camcorder, pretending to make World War II movies.”

Spoonhower continued to pursue his storytelling passion as an undergraduate at Notre Dame, where he studied film production. He went on to complete a master’s degree in computer animation at Rochester Institute of Technology, and took his first job at Electronic Arts as a character animator for its NFL Street games in 2002.

Since then, Spoonhower’s projects have received numerous industry awards, most notably his work for 2K Games on Evolve, which won top honors at the annual E3 video game convention, including Best of Show, Best Console Game, Best Action Game, and Best Multiplayer Game. Evolve will be released this coming spring.

Spoonhower also served as senior video editor and animator on Borderlands 2, which won several Game of the Year awards and sold more than 8 million copies, becoming the best-selling and highest-rated title in 2K’s history.

He is currently developing several short film and independent video game ideas that he plans to take into production over the next year.

On the Cutting Edge

Because Spoonhower will continue to work while teaching at Notre Dame, his film and animation production students will get to learn about the latest best practices that he uses on a daily basis.

“In order to survive and thrive in this line of work, I need to stay ahead of the curve,” he said. “It’s a win-win situation for my students and myself. They learn real-world production techniques—ones that will help them become successful visual storytellers and land jobs in the industry. I stay on the cutting edge of production, work on big video game titles, and continue to learn new techniques that I can pass onto my students. I’m having a lot of fun, and the students seem to be too!”

Spoonhower said he also learns a great deal from his students, whose creativity, hard work, and enthusiasm inspire him to become a more effective teacher.

“I need to be on top of my game in the classroom. I’ve had to push myself to come up with creative lectures and lab assignments. In the process, I have expanded my own technical and aesthetic skill sets, as well as my ability to effectively communicate.”

After living on both coasts and points in between while working in the video game industry, Spoonhower said he was happy to be back in South Bend.

“I had a wonderful experience as an undergrad and I am very comfortable here. It’s a great place to work and raise a family.”

Returning to the College of Arts and Letters is also meaningful, Spoonhower said, because he can now help students develop the essential skills that allowed him to turn his passion into a career.

“The education I received at Notre Dame prepared me to work well with others, communicate effectively, and create films and animations to tell stories visually,” he said. “In all of my studio and freelance experiences, I have found that these are the foundational skills that have allowed me to do well in my field.”

“Notre Dame definitely set me up for success in all of these areas.”