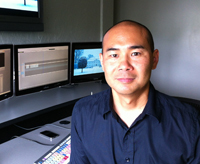 Moneyball. True Grit. The Social Network. Black Swan. If you watched a trailer for any of these movies, then you’ve seen the work of Notre Dame alumnus Scott Mitsui ’92.

A communications and theatre major, Mitsui has spent the past 12 years as producer and vice president of operations at Mark Woollen & Associates in Santa Monica, Calif., a company responsible for some of the most noteworthy and award-winning film trailers in Hollywood.

Mitsui shared his experiences with current students as one of eight Department of Film, Television, and Theatre alumni speakers in a spring 2012 course called Contemporary Media Practices. The class was taught by one of his early mentors, Associate Professional Specialist Ted Mandell.

“I remember thinking that being in the movies was ridiculous and just not practical,” Mitsui recalls. “You can’t really make a living at this, right? But the professors were really supportive of me, especially Ted.

“To make this career choice, you really need to have people who believe in you.”

Born and raised in Hawaii, Mitsui says he came to Notre Dame as an engineering student, then considered majors in economics and mathematics, but nothing clicked. Finally, he signed up for one of Mandell’s film classes—and was hooked. “I fell in love with it,” he says. “It just felt like a good fit.”

And it still is, says Mitsui, who has also received an M.F.A. in film from the University of Miami and studied cinematography at the prestigious American Film Institute.

In Hollywood, he has worked in production as a cinematographer, electrician, and more on everything from music videos to documentaries and independent films. Then he met Woollen, who asked Mitsui if he would join him in building his own “trailer house.” Tired of the grueling 18-plus hour days on a film set, Mitsui says he jumped at the chance.

“You make decisions in your career,” Mitsui says. “In production the days are brutal. You’re at the mercy of the production hog, which is this thing that just keeps rolling and you have to roll with it. And Mark was kind of a prodigy. When he was 20 he cut the Schindler’s List trailer.”

Mark Woollen & Associates now has about 25 employees that create movie trailers, TV spots, interactive, and graphics for major studios. As producer and vice president of operations, Mitsui supervises teams handling promotional trailer campaigns that can began as early as a year before the film is even set for release.

Mitsui, who worked on the award-winning trailers for The Girl with the Dragon Tattoo and Tree of Life, among others, says he and his team begin by watching an initial assembly of the film. Then, they must pare it down to about 11 minutes of essential dialogue and as little as 15 minutes of scene footage.

They select music and a layout structure to tell the story, revising it up to 20 times before showing it to the client, he says. After client feedback, focus groups, and more revisions, the trailer will finally begin to air.

One of the questions he frequently hears is “Why do you always have the same guy narrating?” “That’s actually not true,” Mitsui told Mandell’s students. “There are actually about a half a dozen people that we use. Here, I’ll play a sample for you.”

He then plays a recording of six, nearly identical voices saying “Rated R.”

When asked to look back on his Notre Dame experience, Mitsui says what he found the most valuable was working so closely with peers who were as passionate about film as he was.

“That certainly translates to what I do today.”