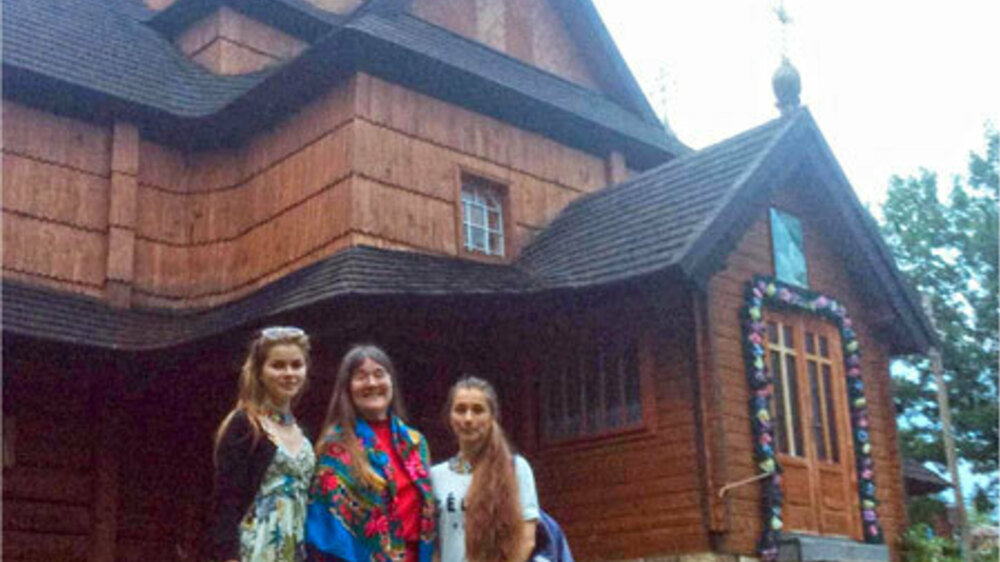 This academic year, as the Medieval Institute celebrates 75 years and the University of Notre Dame marks 50 years since the admission of female undergraduates, the Medieval Institute is highlighting impressive contributions of female scholars to the field of medieval studies. Catherine A. Brown Tkacz (Ph.D. ’83), the first woman to earn her doctorate from the Medieval Institute, is a research professor of theology at Ukrainian Catholic University. She was recently appointed to a new papal commission to study women deacons. Her career shows how rigorous historical inquiry can promote the equal dignity of women and be of service to the church.

In honor of Professor Brown Tkacz, the Medieval Institute stands in solidarity with the people of Ukraine.

What sparked your interest in medieval studies?

Chaucer’s Parson’s Tale introduced me to the synergy of faith and reason, an understanding quite different from what I’d encountered in my Baptist upbringing. Moreover, the medieval engagement with Scripture and indeed all of reality, recognizing it as rich and multivalent and coherent—this rang true to me. Everything is literally what it is, and at the same time it is potentially a real metaphor for other meanings. This fascination, sparked when I was a sophomore, kindled my interest in medieval studies and also led to my becoming a Catholic.

What led you to the graduate program at Notre Dame?

My B.A. and M.A. work in English at the University of Iowa included an excellent two-year sequence in medieval Latin; likewise, I had a year or two there in other medieval languages and medieval theology and a summer course at Harvard in reading medieval manuscripts. Notre Dame’s breadth of faculty in the languages I wanted to pursue drew me, and I wound up doing several tutorials: e.g., medieval Italian with Paul Bosco and Dino Cervigni, Old French with Robert Nuner, as well as palaeography with Christine Eder. Jeffrey Burton Russell was director of the Medieval Institute then, and his strongly interdisciplinary work, studying the history of ideas as expressed through all aspects of a culture, appealed to me. Also, although Princeton offered me a half-fellowship with the prospect of it becoming a full fellowship in a year, Notre Dame offered me full support from the start.

How is women’s history featured in your scholarship?

Years ago when I asked the late Fr. Paul E. Beichner, C.S.C., how he had happened to do such varied things—e.g., being Dean of the Graduate School and at the same time editing Peter Riga’s verse commentary of the Bible from well over a hundred manuscripts—he simply replied that he did what came to hand. My first position after finishing the Ph.D. at the Medieval Institute was as assistant editor of the Oxford Dictionary of Byzantium project at Dumbarton Oaks, and one of the entries assigned to me was on a fourth-century ivorywork, the Brescia Casket. Its iconography had eluded modern explanation. I realized that its program wrapped around corners and that, stunningly, on the front a woman (Susanna of the book of Daniel) was depicted, twice, parallel to two depictions of Christ on the cover. At this time no one was saying a woman could prefigure Christ; au contraire, feminist scholars were stating that it wasn’t possible. It took me a year and a half of snatches of research during lunch hours in the excellent Dumbarton Oaks library to find patristic texts that explicitly treated Susanna in relation to Christ in exactly the scenes depicted on the ivory: the arrest in the garden, the trial before a judge who declared, “I am innocent of the blood of this one.” This is in my first book, The Key to the Brescia Casket: Typology and the Early Christian Imagination (Brepols, with the University of Notre Dame Press, 2001).

"What we may call pastoral concerns set the priorities of my work [...] An event took me into the Carpathian Mountains to the village of Kryvoryvnia [in Ukraine] to lecture to a parish. Teens, adults, and the elderly took part; farmers and a lawyer. Moving to me was that another pastor, from a neighboring village, walked twenty miles to hear my talk. I set forth the parallels between Susanna’s history and the Passion narrative, which the priests discussed with me. I understand that they now preach on this exegesis."

Since then, my main scholarly work has been recovering positive traditions about women that have been largely forgotten since what Brad Gregory aptly calls the Unintended Reformation (2015), namely the secularizing that came with Protestantism. At least eleven biblical women have been recognized as prefiguring Christ in his passion, a dynamic way of emphasizing that everyone, male and female, is called to be holy. My work has been wide-ranging, including biblical studies, the history of deaconesses, and consideration of the Incarnation in the light of genetics, embryology and reproductive science. Most of this research has been presented in the U.S., Oxford and Ukraine. In 2015 I taught the first course on “Women as Types of Christ,” at the Ukrainian Catholic University, for instance. For my work on that exegesis, the training I received in palaeography at the Medieval Institute was invaluable for my transcribing unpublished texts in manuscripts in repositories throughout Europe.

How does your academic background intersect with your record of service to the church?

My work has turned out to focus on the incarnation, both the fact of it and the implications of it. Because Jesus was not only the Messiah but, beyond expectation, God incarnate, he embodied the human potential for theosis. This is basic to the heritage of all Christians. Therefore, I deliberately place my articles with scholarly journals of various churches, such as Catholic Biblical Quarterly and St. Vladimir’s Theological Quarterly. I have lectured and given conferences to diocesan priests, deacons and seminarians, Roman Catholic, Greek Catholic, and Orthodox, as well as Catholic students in grade schools, high schools, and universities. I have served Roman Catholic, Byzantine Catholic and Orthodox seminaries on their advisory boards. To my delight, I was the first woman and the first member of the laity to give conferences and classes within the cloister of the Dominican Monastery of Our Lady of the Rosary, in 1995. For them repeatedly I have given such presentations, and, through the grill, for the cloistered Norbertines in California.

What we may call pastoral concerns set the priorities of my work. For instance, when I discussed with a friend who is a secretary how Jesus gave an unprecedented emphasis to the spiritual equality of the sexes, she recognized every parable and prophecy and event I mentioned but said she’d never heard these Gospel passages interpreted to point out the role of the women. That prompted me to do my first article in biblical studies, “Jesus and the Spiritual Equality of Women” (2001). With insight and knowledge come responsibility. For instance, when I realized that the synoptic Gospels drew on the Old Testament history of Susanna as nothing less than the narrative template for the passion of Christ, that required rigorous examination of the evidence and scholarship, to do justice to the finding. Notably, seventeen verbal parallels, including two six-word clauses, comprise fifty-two words of Matthew 26-27 (Gregorianum, 2006).

In one case, a discovery took me far outside my usual range: the oldest Native American songs extant with both words and music in North America are in a handwritten hymnal in Nez Perce, prepared by Fr. Joseph Cataldo, S.J. When I discussed this with Elders of the tribe, they sang a few hymns passed down to them through memory, which turned out to be the original ones from 1909. So, to make the whole collection with all verses available for education and worship, I edited that hymnal (2010). My linguistic training at Notre Dame helped me study this language so new to me.

Another event took me into the Carpathian Mountains to the village of Kryvoryvnia. When I was teaching at the Ukrainian Catholic University in Lviv in 2015, the pastor of the Church of the Nativity of the Blessed Virgin Mary, Fr. Ivan Rubarek, heard about my work on Susanna and invited me to Kryvoryvnia to lecture to his parish. Teens, adults, and the elderly took part; farmers and a lawyer. Moving to me was that another pastor, from a neighboring village, walked twenty miles to hear my talk. I set forth the parallels between Susanna’s history and the Passion narrative, which the priests discussed with me. I understand that they now preach on this exegesis. Certainly, my parish priest in Spokane does!

Congratulations on your appointment to the papal commission! Could you tell us what that appointment will involve?

While the Commission is covered by papal secrecy, so that its meetings and deliberations are confidential and only the Holy Father can publish its eventual report, each member is to continue private research, and I have already been presenting that in Lviv, Oxford, and elsewhere. The first of my five publications on the history of deaconesses in the early Church was in 2013 in Revue d’histoire ecclésiastique and currently a new one is in progress. To show the larger context, I’ve also begun work on a new book, Female Autonomy and Christianity.

Originally published by Annie Killian at medieval.nd.edu on March 28, 2022.