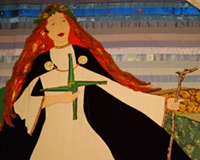 The healing power of music, the joyful celebration of faith—Teach Bhríde (the House of Brigid) seeks to enrich these elements of the Notre Dame spirit in a people who helped form this institution’s mission and heart: the Irish themselves.

The House of Brigid began in 2009, when recent graduates of Notre Dame, aided by generous donors from the Notre Dame community and the Notre Dame Folk Choir, started a yearlong service program to assist in spiritual ministry and liturgical music in the Catholic Church in Ireland.

Their ministry focuses primarily within the Diocese of Ferns at the Church of the Annunciation in Clonard, County Wexford, Ireland, but a second branch is projected to begin serving Dublin within the next few years.

The members of the House of Brigid, all recent college graduates from the United States, are responsible for the liturgical planning and direction of the choir for Clonard’s Vigil Mass, assisting with Clonard’s family liturgy group, teaching catechetical and liturgical lessons at the two primary schools in the parish of Clonard, partaking in sacramental preparation, teaching diocesan music workshops, and organizing retreats across the nation.

“Our mission stems from a spirit of gratitude to the missionaries of Ireland who brought the Catholic faith to America, an effort to strengthen in today’s Irish Catholics the faith that sustained their ancestors, and a desire to give young Americans the opportunity to immerse themselves in Irish culture and Celtic spirituality,” the House of Brigid’s official mission statement reads. 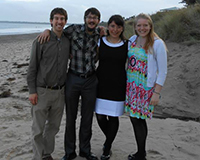 Three of the four recent graduates currently serving at House of Brigid are alumni of Notre Dame’s College of Arts and Letters: Mary Atwood ’12 (theology), Cameron Cortens ’13 (philosophy and theology), and Ben Zelmer ’13 (American studies). They are joined by Joy Viceroy, a 2013 Saint Mary’s graduate who studied music and theatre.

Though Notre Dame owes much of its Catholic vigor to present and former Irish students, faculty, and staff, the Catholic faith in Ireland has been dwindling in recent years. While Ireland was once heralded as a stronghold for the Church, reports have shown that the percentage of Catholics in Ireland attending Mass regularly has greatly declined, especially among young people.

“While some things in Ireland have changed, others have not. The things that still have a foothold: a high regard for hospitality; a far less hurried lifestyle that emphasizes human awareness; a deep respect for song, story and intellect; a reverence for family life, even if church-going is not a significant part of their week,” explains Steven Warner ’80, director of the Notre Dame Folk Choir and one of the individuals who spearheaded the House of Brigid initiative.

Over the last five years, the 16 volunteers who have worked in the House of Brigid have been blessed with warm hospitality from the Irish people. 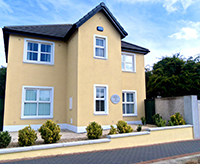 “Their goodness has helped to support the House of Brigid in its endeavors, and any success the community has enjoyed has been in large part due to the faith and trust of the parish staff and the parishioners themselves,” says Carolyn Pirtle, M.S.M ’08, the assistant director at the Notre Dame Center for Liturgy, who was a founding member and the first house director of the House of Brigid.

Enriched by the care of their Irish supporters, four new volunteers each year have lived out their mission by working with the community of Wexford in a variety of ways. They have seen great results. Beginning as a dream, the House of Brigid has become a prosperous reality, thanks to many dedicated advocates in the United States and abroad.

“I was the Irish dreamer, on the other side of the Atlantic, hoping to bring an outreach program to Ireland,” says Monsignor Denis Lennon, P.P., beloved pastor of Church of the Annunciation, Clonard. “The main objective from the beginning was to further liturgical music in Ireland and use liturgical music as a vehicle to bring Irish people who have drifted from the faith back to the faith.”

Joyful, fresh liturgical music is a central part of the work done by the House of Brigid volunteers. In Ireland, most parishes are without music hymnals and have no full-time musicians to assist in the Mass. One essential way that the House of Brigid has brought music into the Church is by relying on the rich Irish musical tradition.

“They have begun to invigorate the faith landscape again, not only by introducing songs from America, but mostly by giving the Irish permission to use their own songs, stories, saints, feasts, and customs in beautifully expressive ways. That amazing, grace-filled interchange is at the heart of the House of Brigid,” says Warner.

Coming from Notre Dame, Saint Mary’s, and now, Marquette, with interests in theology and music, many of the members of the House of Brigid are living testaments to music’s evangelizing power. 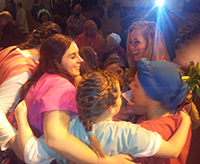 “Music was the way that I found my faith. I hated going to Church on Sundays. I couldn’t connect my faith to anything. But then I found a connection through music. Ever since, I’ve been able to strengthen my faith through song,” explains Joy Viceroy, a 2013 Saint Mary’s graduate and current member of the House of Brigid. “That’s the approach I try to take with the children. If I can help them find their niche, whether it’s music or discussion or something else, I can help them love themselves and help them see that God loves them.”

A large part of their service is directed toward young children who attend Catholic elementary schools, usually up to the sixth grade. In Ireland, the large majority of adolescents attend public high schools, so one of the House of Brigid’s greatest goals is to foster the faith of the children so that as they grow older, they stay in touch with their faith.

“A major blessing is to have four passionate, lovely American young people who are not ashamed to be Catholic, not ashamed to talk about God and praise God, not ashamed to admit how large a role their faith plays in their lives. They inspire many parishioners, young and old, to find pride in the Church and in their faith,” says Sr. Mary Rowsome, S.S.J.G., pastoral associate to Father Lennon at the Church of the Annunciation.

The blessings created through the House of Brigid have been lasting and plentiful, not simply for the people of Wexford, but also for the American young people who have served there.

“I learned how to be truly hospitable, how to slow down and enjoy the company of others over a cup of tea. I learned that it’s okay to try something and have it fail—that success is best measured in terms of quality of experience, not necessarily in terms of numbers, and that failure can often be more helpful in directing ministerial efforts than success can,” says Pirtle. “Most of all, I learned that the people of Ireland, particularly those of Clonard Parish, are truly the salt of the earth.”