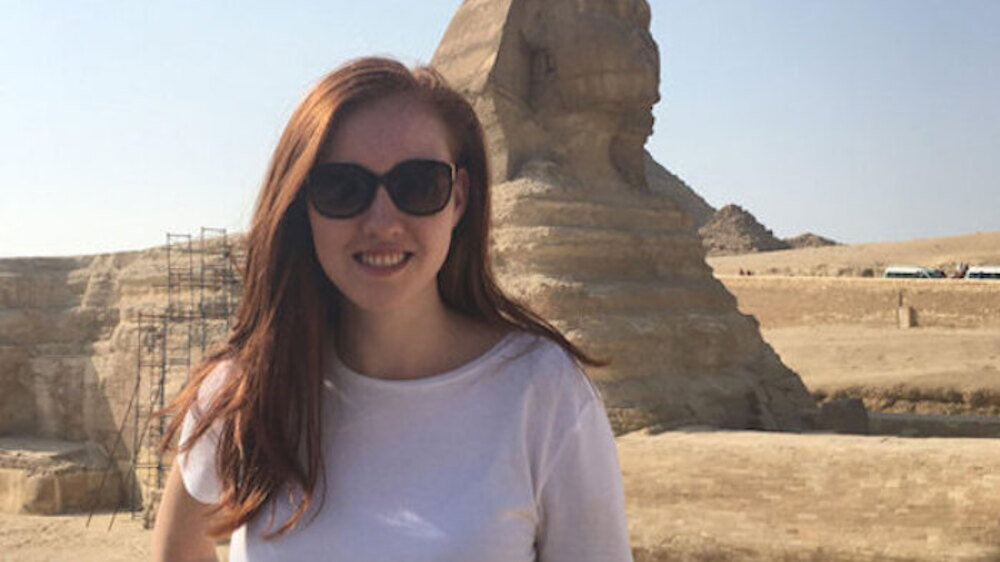 Alumna Erin Hayes ’18 lived in Cairo, Egypt for two years after graduating from Notre Dame. She wasn’t born in Cairo and hadn’t been there before, but her experiences in the country's capital on the Nile River are a direct reflection of her passions.

Before graduation, Hayes had applied for a program through the American University in Cairo that offers graduates of American schools internships in the city. Hayes had studied Arabic at Notre Dame and wanted to live abroad and put her language skills into practice. The program seemed like a perfect fit.

“I had worked at Notre Dame’s career center as a student, so I applied for a career center position at The American University in Cairo and worked there for a year,” she said. “I really loved Egypt and, after that experience, I still felt like I had more to learn there.”

So, Hayes took a position with St. Andrew’s Refugee Services, which primarily provides legal aid for refugees from East Africa, Syria, and Yemen, among other places. Hayes called the experience eye-opening. After working with a more privileged class of Egyptians at the career center, refugee work was tough.

“It was maybe the hardest job I’ll ever have, but also the most fulfilling job,” she said.

By the time Hayes was ready for her next move, she had fallen in love with living abroad. She decided to pursue an advanced degree in another country and, in the last year, earned her master’s in global governance and diplomacy at Oxford in England.

While there, she also worked for Oxford Middle East Review, editing, helping with articles, and writing blog posts. The work fit perfectly with her interests.

In addition to studying Arabic at Notre Dame, Hayes was a political science major. Initially, she was undecided about what she wanted for her primary major until her sophomore year when she participated in the Washington, D.C., program.

During this semesterlong program, students live in D.C., take courses in public policy and other relevant topics, and do internships in government and legislative offices, think tanks, and non-governmental organizations.

After her semester in D.C., which included an internship at the Office of African Affairs at the U.S. Trade Representative, Hayes decided to continue as a political science major.

Once settled on political science and Arabic, Hayes also pursued her interest in travel. She went to Oman with help from a summer Arabic language scholarship. And in her junior year, she traveled to Morocco, lived with a host family in Rabat, and traveled to nearby countries throughout the semester. In addition, when writing her senior thesis, Hayes traveled to Northern Ireland to conduct research.

Hayes’ next move will be to join the U.S. Navy. She's attending Officer Candidate School, a move partially inspired by an experience as an undergraduate fellow with the Notre Dame International Security Center. Wherever the Navy takes her, Hayes is ready for her next national or international adventure.

Originally published by Shannon Rooney at admissions.nd.edu on January 03, 2023.