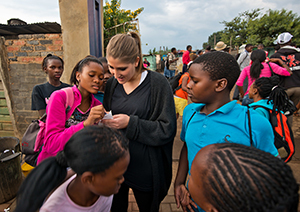 On the second floor of West Lake Hall, a small, nondescript building tucked behind the Rockne Memorial and the other landmarks lining South Quad, a group of Notre Dame students is making big plans. They are focused on addressing the plight of those afflicted with HIV/AIDS in South Africa. They’re even planning a trip to Johannesburg next spring to offer hands-on assistance.

But these are not biology or preprofessional studies majors. They won’t be administering medication to the suffering people of South Africa. They are graphic design students exploring ways to use their talents to promote awareness and prevention of HIV/AIDS. And the inspiring work they’re doing in this class, Design for Social Good: Impact and Change, demonstrates that you don’t need a medical degree to join in the fight against this deadly epidemic.

“I would have had no idea where to start,” says Anne Clarke, a senior majoring in visual communication design and marketing.

The whole initiative starts with Professor Robert Sedlack ’89, who has been teaching the course for a number of years, encouraging his students to deploy their creative talents in support of humanitarian causes. Earlier group projects focused on working with South Bend organizations, including the Juvenile Justice Center, the Civil Rights Heritage Center, and the Center for the Homeless.

The connection to South Africa came from Paul Horn ’97, ’05 M.N.A., a former employee at Notre Dame’s Center for Social Concerns. Horn now serves as the executive director of the Kgosi Neighbourhood Foundation, a nonprofit in Johannesburg. The first collaboration between the foundation and Sedlack’s class resulted in a campaign to address the problem of xenophobia in South Africa. Sedlack and his students won a $50,000 Ideas that Matter grant from SAPPI International to work on the project. 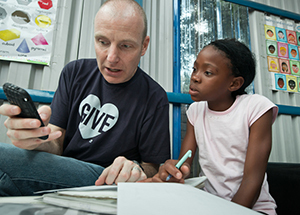 A year later, Sedlack’s class turned its attention to another issue plaguing South Africa: the spread of HIV/AIDS. Eleven students traveled to South Africa with Sedlack in the spring of 2013 to study the root causes of the disease’s hold on the country. They formulated design solutions to educate the people of South Africa, especially women and children, about the risk factors for contracting the virus and the proper channels to receive treatment after infection.

Maria Massa ’14 devoted her senior thesis to the issue. She designed a prototype for an online community that would connect young women in South Africa with others their age around the globe. The site also contained resources for women who tested positive for HIV.

Now working at a design firm in Los Angeles, Massa raves about the effect the class had on her. She gave most of the credit to her teacher. “Professor Sedlack is amazing,” she says. “He never tells you that your idea is too big or that it can’t happen. He just pushes you harder and harder.”

Some of Sedlack’s former students are so inspired by the work in South Africa that they’ve continued to focus on it after graduation. Brandon Keelean ’13 participated in both the xenophobia project and the HIV/AIDS initiative with Sedlack. He cites the class as one of the defining experiences of his undergraduate education.

“It was part of a larger arc as a student at Notre Dame, but this course specifically made this type of work feel real,” Keelean says. “We did a lot of things that actually ended up existing in the world. I can’t exactly speak to the totality of impact we’ve had so far, but it felt like something that was actually improving the community.” 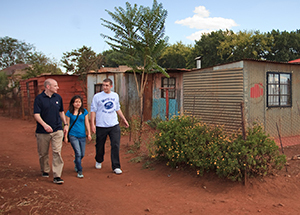 Keelean grew attached to the impoverished community in South Africa, which he has now visited five times. Despite his demanding job as a graphic designer in Chicago, Keelean continues to fight the spread of HIV/AIDS in the country. In September, Keelean, Sedlack, and Jacqueline Hull ’13, another former student, won a $40,000 Ideas that Matter grant to produce a children’s book and other educational materials to assist South African teachers and parents in the struggle against the stigma and alienation that often plague children with HIV/AIDS.

Sedlack’s current students are continuing the work on HIV/AIDS, and they have inherited the enthusiasm of their predecessors. They eagerly explain the four separate projects on which they are working. Examples include using ads on public transportation to destigmatize the virus and preparing more effective literature detailing the importance of infected patients taking their medication even when they’re feeling better.

Spending time with the class, it becomes clear that it’s not just the sick and downtrodden in the South African and South Bend communities who are reaping the rewards. Sedlack’s course also shapes his students.

Samantha Lessen, a senior visual communication design and Program of Liberal Studies major, says it will influence the professional choices she makes when she leaves Notre Dame next year. “I think now I definitely feel a responsibility to do this kind of design work and to try to use design to impact the world in a positive way.”

Big things are happening in the small building behind the Rock.