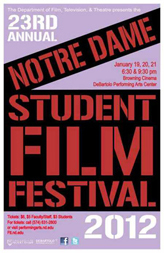 The Notre Dame Student Film Festival returns to campus January 19 to 21 (Thursday to Saturday) at 6:30 and 9:30 p.m. in the Browning Cinema at the DeBartolo Performing Arts Center. Tickets can be purchased at the ticket office, 574-631-2800 or online at performingarts.nd.edu.

Admission is $3 for students, $5 for Notre Dame faculty and staff and $6 for the general public. The total running time is approximately 105 minutes with each film three to 12 minutes in length.

A campus tradition for 23 years, the festival features short films made during the past year as class projects by students studying the art of filmmaking in advanced, intermediate and introductory film production courses taught in the Department of Film, Television, and Theatre. All of the films were shot on location, most in the South Bend area. Michiana residents, fellow students, and Notre Dame faculty loaned their acting skills to the projects. From dark comedy to documentary, the films cover a wide range of genres.

Sponsored by the Department of Film, Television, and Theatre. Visit ftt.nd.edu for complete details on the Festival.