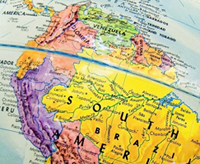 The Center for Public Anthropology (CPA) has recognized 13 first-year students for op-ed articles they submitted to its 2009–10 Community Action Project competition. More than 7,500 students from 28 U.S. colleges and universities submitted work to the CPA op-ed challenge this year. Only the top five percent of entrants are given awards.

Entrants were called on to address three questions about the return of blood samples taken from an Amazonian tribe in a 1968 research project—a controversial issue in anthropology:

The CPA posts students’ responses to their challenge on a website and solicits feedback on the quality of the work from other students participating in the competition. Students who are ranked in the top five percent of entries by their peers are given the Public Anthropology Award.