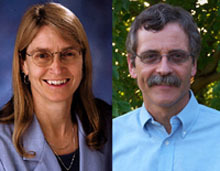 For better or worse, a lot of time and energy gets devoted to efforts aimed at ascertaining the relative quality of academic departments.

Amidst the chorus of opinions, Notre Dame’s Department of Psychology recently has been receiving powerful, if informal, confirmation of both its stature and trajectory in the broader discipline.

The source? Nothing short of a coup in faculty recruitment.

Five outstanding scholars joined the department this past fall, to be followed by four more by the start of the 2010–11 academic year.

“There are two things remarkable about this recent recruitment,” says Daniel Lapsley, the department’s chair. “First, we have hired both the most prominent senior and most promising junior faculty. Second, the sheer number of hires is having a transformative effect on the department.”

At least two of their names—David Watson and Lee Anna Clark—should be familiar to just about everyone in the field.

“David and Lee Anna are arguably the most famous research psychologists in the world,” Lapsley says of his two newest endowed professors.

Watson and Clark, who have been married to each other since graduate school, are coming to Notre Dame from the University of Iowa this summer. Both rank among the Top 100 most-cited psychologists in the ISI Web of Science index.

Watson is the editor of the Journal of Abnormal Psychology, which was first published in 1906 and is a premier psychopathology journal. In the late 1980s, he, Clark, and the University of Minnesota’s Auke Tellegen developed the Positive and Negative Affect Schedule (PANAS); the article they wrote about it has been cited more than 4,500 times.

According to Watson, however, that doesn’t tell the whole story.

“It’s not just an article and a measure, but it’s really a model, it’s a way of thinking about how people experience emotion,” he says. “At its time, it was part of a major shift in the way that people thought about that, and I think that’s continued [to] today.”

Clark recently received a multiyear grant of approximately $2 million from the National Institute of Mental Health. It’s for a project closely related to her position on the work group that’s revising the personality disorders category of the Diagnostic and Statistical Manual of Mental Disorders, considered the “bible” for professionals who make psychiatric diagnoses. Only 11 scholars worldwide are on that particular work group.

She and Watson will play a defining role in launching the department’s nascent clinical program, setting its course alongside the likes of Director David Smith and Scott Monroe, William K. Warren Foundation Professor of Psychology.

It was an informal trip to Notre Dame taken at the invitation of Monroe and Smith—during which Watson and Clark visited Madison Center, a nonprofit behavioral healthcare provider that the department is looking to partner with on a regular basis—that sold them on making the move.

“We were impressed with the director of the Madison Center, how she really seemed to be on top of things there and really knew her populations cold,” Clark says. “She was eager to show the place off and to get involved in a research enterprise. That was very attractive to us.”

Also contributing to their decision, she says, was the strong sense of camaraderie they observed within the department as well as the opportunity to work with two old friends and colleagues: Monroe and Professor Anne Simons.

Simons is another of the new faculty who will start at Notre Dame this fall. Married to Monroe, she too is a highly regarded figure in clinical psychology, specializing in depression and treatment. She will join the department from the University of Oregon.

The fourth member of the fall 2010 incoming class is Jill Lany, a postdoctoral fellow at the University of Wisconsin-Madison who will be an assistant professor. Her appointment builds on the tremendous success the department has had over the last several years in recruiting up-and-coming scholars, including the five who have been on campus since this past August.

“I’m enjoying my new colleagues and the friendly atmosphere at Notre Dame,” says Payne, who studies the influence of sleep and stress on memory and psychological functioning. “There’s plenty to be excited about, but I’m especially excited about the number of top-notch new professors in the department. It’s wonderful to come in with a cohort of enthusiastic, smart people with so much overlap in our research interests.”

Payne’s sense that she and her peers have a great deal to gain from working with one another is a sentiment she shares with the department chair.

“For example,” Lapsley says, “two new faculty members [Valentino and Diehl] are clinical psychologists, but their research has strong developmental components. Two other new faculty [Wirth and Payne] study the psychobiology of stress but in a way that has strong implications for memory and cognitive processes. So there is a much stronger synergy across program areas within the department, and that is very exciting.”

In terms of what made this spectacular round of hiring possible, Lapsley says the University’s willingness to pursue candidates aggressively in a tight job market was invaluable, although he adds Notre Dame wasn’t alone in that pursuit.

“As it turns out, each of our new faculty were very strongly recruited by other universities, even in the poor economy. But Notre Dame was able to pull together a winning package that made us a great fit for them.”