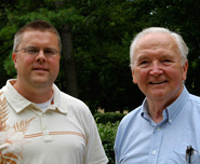 Matt Dowd missed the first Biennial History of Astronomy Workshop, organized in 1993 by Michael J. Crowe, but he has the group photo to prove he was part of the second event in 1995.

Crowe, the Rev. John J. Cavanaugh Professor Emeritus in Humanities in the Program of Liberal Studies, was Dowd’s dissertation adviser for the Ph.D. he received in 2003 in the history and philosophy of science.

“I arrived here in ’94,” Dowd says. “In the third conference, I started getting a little more involved. Eventually, Mike wanted to step aside, so I took on more responsibility for organizing.”

Dowd, who works as manuscript program manager for the University of Notre Dame Press and occasionally teaches in the Program of Liberal Studies, is still organizing the conference, recruiting international speakers, and coordinating arrangements for the eclectic interest group.

This year’s conference, the 10th, featured talks by Liba Taub, a professor in history and philosophy of science at the University of Cambridge and director and curator of the Whipple Museum of the History of Science.

Paper presentations and panel discussions covered topics from Kepler’s calculations and the 400th anniversary of the telescope to “The Relations between Dutch Radio Astronomers and Their Soviet Colleagues during the Heyday of the Cold War,” by Astrid Elbers of the Leiden Observatory.

“The group is always a very mixed group,” Dowd says, adding that some 50 people attended this year. “Historians of astronomy come from different backgrounds. You’ve got a number of different kinds of people.”

After all, the sky is the starting point, not the limit.

“Astronomy is one of the oldest sciences,” he says. “There’s a huge history of it—easily 2,500 years and maybe another millennium or two. You’ve got elements of it in nearly all cultures.

“You can really span space and time around the world. That means there’s lots and lots of different questions,” from how Polynesian navigators traveled by the stars to the Hubble Telescope. 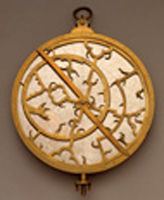 The conference, presented jointly by the University and the Adler Planetarium, is also supported by the Graduate Program in the History and Philosophy of Science, along with the Institute for Scholarship in the Liberal Arts.

While recent workshops have identified themes—philosophy of astronomy this year, International Year of Astronomy in 2009, instruments before that—the conference maintains a variety. One day is devoted to a field trip to the Adler Planetarium in Chicago.

“It’s a much more casual workshop,” Dowd says. “It’s not a professional society. We’ve been willing to take work-in-progress papers. It’s a congenial atmosphere. We want young scholars to be involved. We always have a number of Notre Dame folks.”

At the conclusion of this year’s workshop, Dowd was presented with the Adler-Mansfield Prize, awarded annually by the Adler Planetarium, for his contributions to the workshop. The award carries a $1,000 cash prize. “Matt has provided extraordinary service to the community of historians of astronomy, and has done so not as part of his work portfolio but in addition to it,” noted Marvin Bolt, the Adler’s vice president for collections.