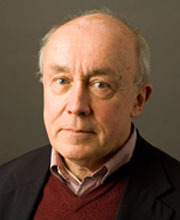 Rev. Brian E. Daley, S.J., Catherine F. Huisking Professor of Theology at the University of Notre Dame, specializes in “patristics,” the study of the writings, sayings and lives of the earliest Christians.

Whatever dusty, antiquarian associations may burden that scholarly label, they seem misapplied in Father Daley’s case. This Jesuit priest, certified both as a rowing and a boxing coach, serves as a cut and bucket man during Notre Dame’s celebrated Bengal Bouts and confesses that he loves his sidelong involvements in Notre Dame’s men’s and women’s boxing programs “as a kind of alternative form of teaching and ministry.” Besides, amateur boxing, his hobby for some four decades now, is an agreeable way to keep himself in shape.

These anomalous enthusiasms drive Father Daley’s scholarship no less than his recreation. “Brian is everywhere acknowledged as one of the leading patristics scholars in the world,” says John Cavadini, chair of Notre Dame’s theology department. “He is equally at home in North American and European settings, and, as a Jesuit, enjoys a familiarity that extends to theologates in Africa and Asia as well. His prominence in the field is exceeded by no one in the world, and equalled by few.”

Father Daley’s 1991 book, “The Hope of the Early Church,” which he introduced as “a broad sketch…of the various aspects of early Christian hope for the future of the individual, Church and planet,” has a noticeable resonance with public themes swept into fashion by the recent presidential election. The ancient past for him is not so ancient, and barely past.

In the same introduction, Father Daley seems to have given what amounts to his own apologia. “As a historical theologian,” he writes, “a student of the Christian tradition, who is convinced of its living value for faith today, I truly believe that the hope of people in our own age can be nourished and inflamed by an informed acquaintance with the hope of earlier generations.”

That conviction may animate Father Daley’s ecumenical work with the Orthodox-Roman Catholic Consultation in North America, a standing group which he serves as executive secretary. In any case, undergraduate and graduate students who attend his popular lectures at Notre Dame, like those area churchgoers who have heard him preach, will generally attest to his success in applying it. Now they have been joined by several of his colleagues in patristic studies, who celebrate his work in a book recently published by the University of Notre Dame Press.

“In the Shadow of the Incarnation: Essays on Jesus Christ in the Early Church in Honor of Brian E. Daley, S.J.,” edited by Peter W. Martens, visiting professor of theology at Yale’s divinity school includes contributions from D. Jeffrey Bingham, Khaled Anatolios, Michael C. McCarthy, S.J., Carl L. Beckwith, Christopher A. Beeley, Kelley McCarthy Spoerl, Basil Studer, O.S.B., Archbishop Rowan Douglas Williams, Lewis Ayres, David R. Maxwell, John J. O’Keefe, John A. McGuckin, and Andrew Louth. Examining the works and witness of early Christian writers and theologians from the second through the seventh century, the essays reverberate Father Daley’s insistence that the ancient writers’ assertions about Jesus must, in the publisher’s words, “be interpreted in the largest possible context of concerns about Christian practice and discipleship, scriptural interpretation, martyrdom, salvation, the love between Christ and believers, and the ultimate mystery of the incarnation.”

According to Daniel H. Williams, professor of religion at Baylor University, “the rich diversity and wealth of information found in these essays offers an admirable reflection on the wide-ranging scholarship and depth of scholarship that have long been associated with Brian Daley’s work. Considering the scope of participants in this collection, from accomplished peers to recent Ph.D. graduates, the book bears witness to the degree Father Daley has influenced and shaped generations of scholars. As such, this collection succeeds in honoring a man of faith who is certainly worthy of such an honor.”

A commendably humble man, Father Daley doubtless takes this most recent honor in stride. It isn’t exactly the Golden Gloves, after all, but it will have to do.

Originally published by Michael O. Garvey at newsinfo.nd.edu on February 26, 2009.