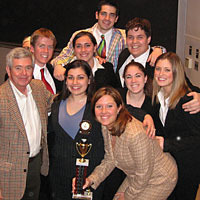 For John Burke, Notre Dame’s mock trial program was far more than a chance to don a crisp suit and play lawyer.

Tournaments allowed him to talk with practicing attorneys and judges. Classes gave him an advance taste of law school’s intellectual demands. And the program helped him to develop the public speaking skills that have paid off during his undergraduate years, paving the way for a successful professional career.

“The most significant impacts have been on my abilities to speak in public and to reason logically,” says Burke, who in May 2009 earned his first bachelor’s degree—in electrical engineering—and has since juggled applying to law school with finishing a second degree, in psychology.

Burke is among the latest students to benefit from the University’s mock trial program, which started 20 years ago and now includes both classroom work and on-the-ground experience at competitions across the county.

In the late 1990s, the program received a boost when Bill Dwyer a 1969 alumnus and Chicago attorney, volunteered to guide it. Dwyer became involved when he helped a friend’s daughter and her teammates prepare for a mock trial competition.

Since then, Dwyer has coached Notre Dame’s teams in AMTA competitions. Each year, the association holds three rounds of tournaments, beginning in February and ending in April with a 48-team championship tournament.

Notre Dame has sent two teams to the second round of competition each year and has qualified for the championship tournament all but once. In the past 10 years, the University’s teams have some half-dozen top 10 finishes.

Since 2002, Notre Dame’s College of Arts and Letters has offered mock trial classes for credit, providing students with a systematic introduction to the fundamentals of arguing a case. Classes focus on the rules of evidence and procedure and on speaking skills needed to present evidence, question witnesses, and persuade a jury.

“Speaking skills—the ability to effectively communicate in a public, stressful setting—analytical thinking, confidence, the ability to work with others, and leadership are among the practical benefits students gain from mock trial work,” Dwyer says.

That was certainly Burke’s experience.

“The feedback I have received is invaluable,” he says. “Bad habits that would otherwise go unnoticed, and therefore uncorrected, have quickly been caught and corrected through constructive feedback.”

Students such as Burke are evidence of the program’s success, notes Ava Preacher, an assistant dean in the College of Arts and Letters who helps administer the mock trial program. “Students come away more confident, more mature, more well-spoken, and better able to accept constructive criticism and use it to improve their work and their performance,” she says.

John McGreevy, I.A. O’Shaughnessy Dean of the College of Arts and Letters, says the program is just one of several of ways in which the College helps students hone public communication skills.

“I am enthusiastic about mock trial because it is another avenue—along with College Seminar and Notre Dame’s debate team—for developing the public speaking skills of our students,” McGreevy says. “Whether or not our mock trial students end up in law school—and of course many of them enroll in the country’s best law schools—they are well served by the program’s intense focus on clear, oral argument.”