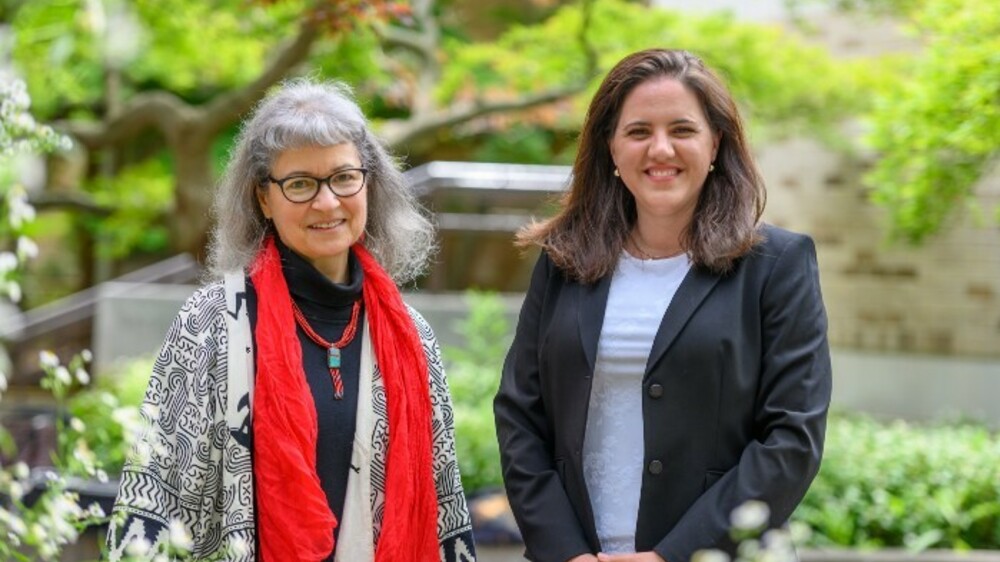 In less than six minutes, the new film “Breaking the Cycle” invites caregivers, parents, policymakers, and anyone concerned with child development to adopt more collaborative and peace-inducing strategies for child rearing. The new film, a companion to the website EvolvedNest.org, grew out of groundbreaking research by Darcia Narvaez, Kroc Institute faculty fellow and professor emerita of psychology, with support from current peace studies and psychology Ph.D. student Mary Tarsha.

Narvaez’s research and the new film contrasts two ways that society can function: through a “Cycle of Competitive Detachment” where children’s basic needs are not met, undermining their development at every level, leading to adults who are detached or distracted from children (the current reality in many economically-wealthy countries around the world) vs. a “Cycle of Cooperative Companionship” where children’s basic needs are met, children flourish and grow into healthier and more peaceable adults. Currently the U.S. ranks 41st out of 41 developed countries for child and adult well-being, and Narvaez and Tarsha argue that current patterns for child-rearing are largely to blame.

“As I conducted my research, it was shocking to find out about 75 million years of social mammal nesting, humanity’s millions-year-old evolved nest, and how we violate evolution’s lessons routinely, in the United States especially,” Narvaez said.

Drawing on research on the ways peaceable cultures throughout human existence have raised children, Narvaez developed the concept of the Evolved Nest, a system focused on meeting the needs of babies and young children rather than minimizing them. The system includes nine components ranging from creating soothing environments for children in the womb to on-request breastfeeding to providing a welcoming social climate and more.

“The nest is about fulfillment of needs so that the child can thrive, as well as the family and community around them,” Tarsha said. “It’s not just meeting needs, but fulfilling them in abundance.”

As Narvaez continued her research on neurobiology and how it is shaped in childhood, she grew frustrated with the inability to reach broader audiences through traditional academic channels, and began to blog at Psychology Today. From there, she connected to an editor at Kindred Media who helped her to create the Evolved Nest website to serve as a hub for popular articles, podcasts, videos and more.

The creation of the film is the next step in spreading the message further. The film is available in both English and Spanish, and sub-titles are available in Arabic, Bengali, Chinese (Mandarin), Croatian, Dutch, English, French, German, Hindi, Hungarian, Japanese, Portuguese, Russian, and Turkish.

“I really wanted to have a heart-centered way of presenting this information that triggers positive energy and imagination,” said Narvaez. “We’ve undermined our communal imaginations and underestimated how they can help us see what’s possible for humanity.”

Tarsha got involved with the project during her second year in the Kroc Institute’s Ph.D. program and was instrumental in hosting and creating short podcast series meant for popular audiences, including a series discussing Narvaez’s multi-award-winning book Neurobiology and the Development of Human Morality: Evolution, Culture and Wisdom and another series outlining each of the nine components of the Evolved Nest.

“It fills a really important gap within peace studies, which is creating a developmentally-informed understanding of the human person and society,” said Tarsha. “It’s also very important to safeguard against further colonialism. Having an awareness and understanding of the Nest helps reveal the lenses we Western scholars and practitioners sometimes carry with us and can prevent us from exporting these harmful developmental models to other communities around the world.”

Narvaez also sees this work as critical to raising healthier children and young adults who will contribute to building more peaceable and sustainable societies.

“The culture has forgotten about the Evolved Nest for building a human being who is cooperative, peaceful, and other oriented,” she said. “The Nest allows us to bring together scholarship from many different disciplines that contribute to understanding how a peaceful human being develops.”