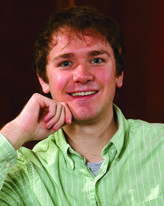 Notre Dame undergraduate Josef Kuhn has set out to show how the human struggles depicted in ancient Greek literature are just as pressing today as they were thousands of years ago. After studying Euripides’ well-known tragedy The Bacchae, the senior Program of Liberal Studies (PLS) major decided to write a novel based on the classic but set in modern times.

“The Bacchae is a powerful and unconventional play from the classical Greek era that presents penetrating insights into the human psyche, the limits of authority, and the nature of the divine,” Kuhn says. “The ideas explored in it hold just as much relevance for contemporary America as they did for ancient Greece.”

Funded by an Undergraduate Research Opportunity Program grant through Notre Dame’s Institute for Scholarship in the Liberal Arts, Kuhn says his novel updates the ancient discussion of abandon, authority, and awe by dealing with the contemporary intersection of drug use, politics, and, especially, religion.

“I wanted to compare the Dionysus myth to America in the 1960s, when it seemed like everything got kind of loopy, as if Dionysus had taken hold of the country. That decade has literally become mythologized for us,” he says. “But at the same time, I saw the novel taking place in 1999 instead of 1969.

“This allows me to explore the aftershock of the ’60s—show how the legacy of those days has stretched even to today and how the consequences have played out.”

Kuhn, who cofounded, has published in, and works on the undergraduate literary journal Lost Piece, says he got his inspiration for the project after reading The Bacchae for a PLS Great Books Seminar.

“While reading this play, I was struck by certain similarities between the character of Dionysus and several other characters from 20th century literature, including Dean Moriarty in Jack Kerouac’s On the Road, Randle P. McMurphy in Ken Kesey’s One Flew Over the Cuckoo’s Nest, and Ken Kesey himself as portrayed in Tom Wolfe’s The Electric Kool-Aid Acid Test. … I started making connections between the Dionysus story and the stories of these characters from mid-century America, and I began to sense that there was material for my own story here.”

To deepen his understanding of the play, Kuhn says he began his undertaking by extensively researching The Bacchae and its relevant history through both scholarly analyses and other creative adaptations. He also continued his investigation by studying American society in the 1960s and 1990s. “I was really trying to get into the mindset of that era and see all the ways it related to Dionysus,” he says.

In the end, not only did this research contribute to his goal of constructing his own piece of creative fiction, it also gave him the idea for his senior thesis.

“The thesis gives you a chance to see just how much there is behind one little book or one little notion,” Kuhn says. “The Bacchae is a short play—you can read it in about two hours—but by digging so far into it, I have found out how much can be packed into one little cultural artifact.

“It’s really like a small gateway into a vast, complex world, like the wardrobe into Narnia. And after digging so far into one thing, you begin to see how it is related to everything,” he says. “It shows you how everything is connected.”

A Future in Writing

Writing his own novel has, at times, been both easier and harder than expected, says Kuhn.

“I had to keep the overall outline of the novel in mind and adjust it a few times, but when I was actually writing, it didn’t require much extra concentration as compared to a shorter work,” he says. “The hardest part of writing a novel, I found, is the perseverance it takes.”

After finalizing his book, Kuhn wants to submit it to national publishing houses. He plans on pursuing creative writing further once he graduates and hopes to one day realize his dream of being a professional author.

Overall, the continuing experience of writing a novel and a senior thesis, combined with his major in the Great Books, has helped him develop in ways he hadn’t expected.

“Reading the great works of Western civilization, most of which I was ignorant of beforehand, has opened my mind to a whole new world of thought,” Kuhn says. “I feel like I have been raised to a new plane of intellectual existence that I had never even known existed before—a plane that one cannot really know or understand until one has been there.

“It was like being lifted out of Plato’s cave into the sunlight.”