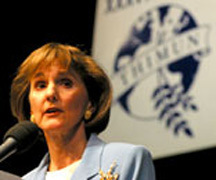 Gillian Sorensen, senior advisor to the United Nations Foundation, will deliver a lecture titled “The State of Women Internationally: Where Are We and Where Are We Going?” at 6p.m. Nov. 6 (Tuesday) in the Hesburgh Center auditorium at the University of Notre Dame.

A national advocate on matters related to the United Nations and the United States-United Nations relationship, Sorensen served from 1997 to 2003 as the U.N. assistant secretary-general for external relations. In that position, she was responsible for outreach to nongovernmental organizations and was the contact point for the secretary-general with parliamentarians, the academic world, religious leaders and other groups committed to peace, justice, development and human rights.

From 1993 to 1996, Sorensen served as special adviser for public policy, where her duties included directing the U.N.’s 50th anniversary observances in 1995. She led the planning of conferences, debates, documentaries, concerts and exhibits; the preparation of books and curricular materials; and the coordination of the UN50 Summit at which 180 presidents and prime ministers participated.

Sorensen worked from 1978 to 1990 as New York City commissioner for the United Nations and consular corps, serving as the city’s liaison with the world’s largest diplomatic community. Her responsibilities included matters related to diplomatic security and immunity, housing and education, and other cultural and business contacts and more than 30,000 diplomats. She secured federal reimbursement to New York for the costs of diplomatic protection, which continues to this day. During this time, she was described as “the diplomat’s diplomat” by the New York Times.

Sorensen is a graduate of Smith College and studied at the Sorbonne. In the fall of 2002, on leave from the U.N., she was a fellow at the Kennedy School of Government at Harvard University. She is a member of the Council on Foreign Relations and a fellow at the University of Southern California Center on Public Diplomacy. Previously, she served as a board member of the Corporation for Public Broadcasting. In addition to her public service, she has been active in politics and was a delegate to three national presidential conventions.

Originally published by Elizabeth Rankin at newsinfo.nd.edu on October 30, 2007.