Both new hires say they were drawn to Notre Dame by the University’s collaborative, interdisciplinary atmosphere and impressive, engaged students.

According to Wells, the class she taught as part of her on-campus interview was full of well-prepared undergraduates brimming with intelligent questions and arguments. “I’m excited to be joining the faculty here,” she says. 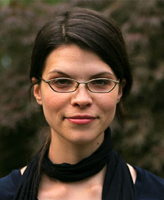 Wells specializes in 20th-century Argentine and Brazilian narrative, with a focus on the interwar period and avant-garde practices, the relationship between modernism and mass culture, theories of history, film and visual culture including science fiction, and trans-national literatures of the Americas.

“From the very beginning of our search for a Brazilianist, Sarah emerged as the top candidate, and she only grew in our estimation through subsequent stages of the process,” says Professor Theodore J. Cachey, Jr., chair of the Department of Romance Languages and Literatures and Albert J. and Helen M. Ravarino Family Director of Dante and Italian Studies.

“Working in both Brazil and Spanish Latin America, Sarah stands out for her versatile scholarly profile and her gifts as a teacher,” he says.

In Notre Dame’s College of Arts and Letters, Wells plans to teach an undergraduate course on Brazilian literature and cultures in spring 2013 as well as an introductory course on Portuguese-language Brazilian cinema. She also hopes to offer a graduate course on a seminar on transnational modernisms.

Wells is currently writing a book about the relationships among literature, film, and radio in Brazil during the 1930s. “Modernism was a global phenomenon, but in Latin America it is bound up with questions of post-colonialism,” she says. “After a rash of military coups in the 1930s, there was a big shift from celebrating new literature and media to a more melancholy outlook, also inspired by the industrialization and decreasing novelty of television and cinema during the period.”

As a new faculty member, Wells says she is impressed by the University’s commitment to Latin America and the opportunity to collaborate with other departments and centers in the College of Arts and Letters and across the University, including the Institute for Latino Studies and Kellogg Institute for International Studies.

Notre Dame “is a place where I can spread my wings and grow as a scholar and teacher,” Wells says. 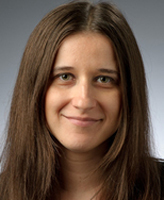 “Diana’s appointment,” Cachey says, “contributes significantly to an emerging area of focus in film and literature in our department, and she brings to our curriculum excellent preparation on a wide range of scholarly topics in Spanish literature and culture from the 19th to the 21st century. We’re delighted to welcome her.”

Jorza is currently completing her Ph.D. in Spanish and Portuguese languages and cultures at Princeton University with a dissertation titled “Screwball, Disparate, and Dark Comedy: Forging an Alternative Public Sphere in Postwar Spain.”

While Spain has evolved with lightning quickness since dictator Francisco Franco died in 1975, Jorza says, Spanish women were legally required as late as the early 1970s to gain permission from their husbands to work.

“The postwar screwball comedies put forth some of the first alternative models for gender roles, love, and family that contemporary Spaniards could access,” she says. “I argue that the portrayal of rebellion, confusion, and comedy is subversive even if it is presented as a ridiculed counter-model.”

At Notre Dame, she hopes to collaborate with other Arts and Letters faculty in the Department of Film, Television, and Theatre and the Ph.D. in Literature Program. With comparative literature experience involving British, American, German, French, and the Slavic languages (in addition to Spanish and Portuguese), Jorza says the Ph.D. program “was a major attraction to me, and I’m looking forward to being a part of it.”