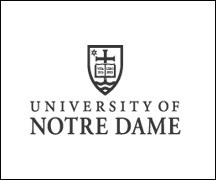 David M. Baron and Kathleen M. Fox, 2006 and 2007 graduates, respectively, of the University of Notre Dame, have been elected to the three-year terms reserved for recent graduates on the University’s Board of Trustees.

A second-year student at Harvard Law School, Baron is active in the Catholic Law Students Association on campus. He is scheduled to earn his juris doctor degree from Harvard in May 2009.

Fox is a first-year student at Stanford Law School, where she expects to earn her juris doctor degree in June 2010. She is involved in the Stanford Public Interest Law Foundation and the Guardianship Pro Bono Program.

Notre Dame’s Board of Trustees is chaired by Richard C. Notebaert and numbers 55.

Originally published by Dennis Brown at newsinfo.nd.edu on May 09, 2008.