Two professors in the University of Notre Dame’s College of Arts and Letters were awarded 2013 book awards by Christianity Today. The magazine reviewed more than 450 entries to determine the best new book in each of 10 categories. 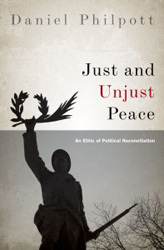 Daniel Philpott, associate professor of political science and peace studies at Notre Dame and a faculty member in the University’s Kroc Institute for International Peace Studies, won in the Missions/Global Affairs category for Just and Unjust Peace: An Ethic of Political Reconciliation (Oxford University Press).

Philpott specializes in international relations and political theory, as well as religion and global politics. He drew upon two decades of activist work in central Africa and Kashmir to write the book, which makes the case for reconciliation as a route to justice and lasting peace after violent conflict. One of the most dramatic and interesting practices of reconciliation, he argues, is forgiveness.

Just and Unjust Peace offers “new hope for solving one of humanity’s most intractable problems,” the magazine says.

“I am humbled by this award as well as grateful,” Philpott says, “because it gives visibility to the message that I want to convey through the book: the possibility of reconciliation following some of the darkest imaginable injustices. I’m honored to be recognized by Christianity Today in particular, since the Christian sources of reconciliation are an essential dimension of the book.” 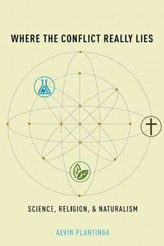 Plantinga, John A. O’Brien Professor emeritus in the Department of Philosophy, says he was delighted to learn that the magazine had selected his latest work as one of the best books of the year. “Their endorsement is certainly significant,” he says.

Where the Conflict Really Lies explores the compatibility of science and religion, arguing that the supposed conflict between the two fields of study is superficial. Instead, science and religion offer two different forms of discourse that attempt to speak to the same “truth.”

“This book offers top-notch scholarship to pit against the very best arguments of contemporary atheism, as well as to clarify what truly is at stake in the battles orthodoxy faces in science, biblical studies, philosophy, and more,” Christianity Today says.

“A tour de force by one of our era’s great philosophers.”