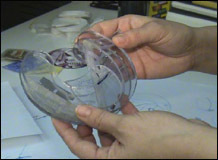 A design studio tucked in the basement of Riley Hall seems an unlikely venue for social activism, but it’s where some of Notre Dame’s most creative minds seek and find solutions to a range of vexing social problems.

Senior Ashley Ceniceros toiled for more than six months on a product that has the potential to save the lives of thousands of newborn babies in developing countries.

The senior industrial design major developed a prototype for a newly designed, sterile umbilical cord cutter – an idea prompted by a visit to Nepal last summer with several fellow design students on a trip led by instructor Ann-Marie Conrado. The team worked in conjunction with fair trade organizations.

Upon her return, Ceniceros learned of a design contest for a medical center in Nepal. After several weeks of research, she discovered one of the most pressing problems in that country was infant mortality due to the use of non-sterile umbilical cord cutting instruments – a problem she set out to solve by applying her design skills.

“I learned everything I could about the umbilical cord. I talked to doctors, read Web sites and new-mother blogs. I learned what it was, what it did, what it looked like, felt like, and how we in the Western world clamp and cut the cord.”

“I then investigated cutting methods. I bought a plethora of blades and scissors and tested them all. I actually went out and bought tripe and used different cutting methods on it to discover what was the most effective.”

The result: An umbilical cord cutter, no larger than the lid of a jelly jar, whose construction addresses the specific needs of a developing country – it’s easy to use, safe, sterile, reusable, and mirrors some traditional practices rather than imposing Western sensibilities.

“Every day, you’re faced with new experiences and new challenges that, being trained to think like a designer, you automatically try to solve in your head with a new product,” said Ceniceros.

Her next step is to get the prototype into the hands of professionals and activists who could connect a team of engineers and other designers and continue the device’s development to the marketplace.

Social justice through design is an emerging trend in the design world and a movement that is particularly apt for Notre Dame’s institutional ethos of turning scholarship into service.

“Notre Dame is at the forefront and we are creating a distinctive identity for our design program based on that.”

Both undergraduate and graduate students in Notre Dame’s graphic design and industrial design programs embrace the challenge of refining and expanding the role of designers in the 21st century. In the past two years, student projects have included a line guide system for blind swimmers to help them swim faster and unaided, a plastic cap that fits over the lid of any size prescription medicine bottle to make opening easy, and an inexpensively manufactured oven for use in huts in Nepal that would reduce respiratory illnesses caused by the use of open fires in homes for cooking.

Faculty members like Robert Sedlack inspire and support students, recognizing the extraordinary social influence these future designers will have.

Sedlack, colleague Paul Down and several graphic and industrial design students became involved with an ongoing project in Haiti called “Bon Sel” (good salt) – a perfect example of social design at work, demonstrating the impact design can have when applied appropriately and in collaboration with organizations dedicated to social betterment.

Through the work of Notre Dame biologist Rev. Thomas Streit, C.S.C., who, forthe past 14 years has fought lymphatic filariasis (LF) in tropical countries, the two design professors and their students were challenged to create a visual communications campaign that would keep Haitians from washing their salt, therefore retaining two vital nutrients — iodine, which can raise IQ levels as much as 15 points, and diethycarbamazine, which can treat LF.

Out of this challenge was born a communications plan that would both ensure the fortified salt’s purchase and communicate its benefits. Sedlack and his students developed an identity program and marketing campaign, naming the product “Bon Sel” (good salt) and creating the slogan “clairement bon” (clearly good.)

“This is the kind of worthy opportunity that allows both students and faculty to make a lasting contribution to better the lives of Haitian people and serve Notre Dame’s mission,” Sedlack said.

Originally published by Susan Guibert at newsinfo.nd.edu on May 16, 2008.