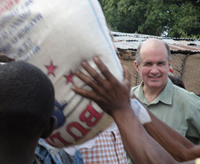 Jim Cavnar ’67 originally came to Notre Dame intending to get a degree in physics but his life has been less about studying forces than becoming one for good.

Cavnar is a founder and president of Florida-based Cross International Inc. and Cross Catholic Outreach Inc., two Christian relief and development charities founded in 2001 to help the poorest of the poor worldwide. He has worked in Catholic and ecumenical ministries for 45 years and won this year’s Rev. Louis J. Putz, C.S.C. Award from the Notre Dame Alumni Association and Notre Dame Senior Alumni.

“What Notre Dame provided was the opportunity to meet other students and build relationships,” Cavnar said. “That relationship (with Notre Dame) has endured to this day.”

In essence, his organization helps the helpers, supporting church-based charities that serve the poor and tracking a donor’s gift from the bank to the street. His non-profits accounted for $200 million in aid last year in 40 countries and funded 250 projects.

“Accountability in the use of funds is the number one thing donors always look for,” Cavnar said. “They have a lot of trust and confidence in our organization because they see a lot of transparency.”

His life switched tracks near the end of his sophomore year at Notre Dame, when he went to a retreat and “really prayed about what God wanted me to do.”

“That set me to kind of a new phase in my life,” Cavnar said. “I thought the Lord was really calling me to a different career path.”

After graduating from Notre Dame with a theology degree, Cavnar began working in campus ministry at the University of Michigan and helped found and lead an ecumenical lay community in Ann Arbor of 3,000 members, promoting evangelization and spiritual renewal nationally and internationally.

Out of that effort grew Servant Ministries, an international mission organization and publishing company, and he also led Servant Music, which produced 21 albums of worship music and a series of best-selling songbooks in the 1970s.

In 1992, he moved to Florida to serve as executive director of Food for the Poor before helping to start Cross International and Cross Catholic Outreach.

Cavnar said his organization is dedicated to making long-term funding commitments and has helped support projects such as an AIDS ministry begun by nuns in Mozambique.

“We see our role as enabling individuals and the Church in the U.S. to respond to the call of God and connect them,” he said. “We are one little part of the Body of Christ.”