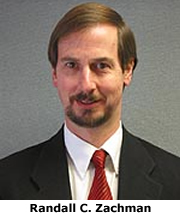 In his groundbreaking new book “Image and Word in the Theology of John Calvin,” Randall C. Zachman, associate professor of theology at the University of Notre Dame, reveals and analyzes the Swiss reformer’s understanding of image and word both comprehensively and chronologically, with attention to the way that each theme develops in Calvin’s theology.

The 536-page book was published March 15 by University of Notre Dame Press.

For most scholars, Calvin (1509-1564) insisted on the essential invisibility of God to deny that God could be represented in any kind of visible image. This claim formed one of his foundational arguments against the display of manmade images in worship.

Zachman argues, in contrast, that although Calvin rejects the use of what he calls “dead images” in worship, he does so to focus our attention on the “living images of God” in which the invisible God becomes somewhat visible. Calvin insists that these images cannot rightly be contemplated without the Word of God to clarify their meaning; we are only led to the true knowledge of God when we hold together the living images of God that we see with the Word of God that we hear.

This combination of seeing and hearing pervades Calvin’s theology, from his understanding of the self-revelation of God the Creator to his development of the self-manifestation of God the Redeemer in Jesus Christ. According to Zachman, Calvin maintains the same linking of seeing and hearing in our relationships with other human beings: we must always hold together what we see in others’ gestures and actions with what we hear in their words, so that the hidden thoughts of their hearts might be manifested to us.

Zachman’s nuanced argument that Calvin holds image and word, manifestation and proclamation, in an inseparable relationship is relevant to all the major themes of Calvin’s theology. It constitutes a highly significant and surprising contribution to our knowledge of the Reformation and an invitation to further study of theological aesthetics.

Thomas Davis, managing editor of Religion and American Culture: A Journal of Interpretation, said Zachman’s book “may well become the standard introduction to the theology of John Calvin. Better than any book I know, it makes sense of Calvin’s work and methods while capturing Calvin’s religious sensibilities in a way no other does. This may be the book that finally demolishes an older image of Calvin that much of the Calvin scholarship has been chipping away at for the last thirty years.”

A member of the Notre Dame faculty since 1991, Zachman is the author of “The Assurance of Faith: Conscience in the Theology of Martin Luther and John Calvin” and “John Calvin as Teacher, Pastor, and Theologian: The Shape of his Writings and Thought.”

Originally published by Kathy Pitts at newsinfo.nd.edu on March 19, 2007.