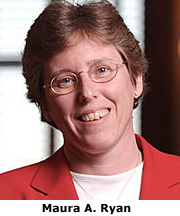 The Association of Theological Schools in the United States and Canada (ATS) and the Henry Luce Foundation have named University of Notre Dame theologian Maura A. Ryan a Henry Luce III Fellow in Theology for 2007-08. She is one of seven award recipients selected from more than 250 ATS member graduate theological schools.

Ryan will engage in a yearlong research project titled “Health, Development, and Human Rights: New Directions for Christian Bioethics.” At the conclusion of the research year, she will join current and past fellows at the annual Luce Fellows Conference to present her work and discuss its impact.

With Christian bioethics beginning to take on a global health perspective, Ryan’s project shows that adequate and responsive global bioethics must engage debates within contemporary development theory as well as discourses and movements on international human rights.

Specific topics of her research include the relationship between health and persistent poverty, the effect of international economic systems on access to care, the role of the environment in health promotion, the impact of political conflict on health and health care delivery, and the effectiveness of transnational partnerships for the promotion of health-related initiatives.

Ryan, the Lilly Associate Professor of Christian Ethics at Notre Dame, received her doctorate at Yale University. A fellow of the University’s Kroc Institute for International Peace Studies and a 2001 recipient of the Kaneb Teaching Award, she also served as Notre Dame’s associate provost from 2001 to 2004.

Ryan is the author of “Ethics and Economics of Assisted Reproduction: The Cost of Longing” and the co-editor of “The Challenge of Global Stewardship: Roman Catholic Responses.” Her primary research interests include bioethics and health policy, feminist ethics and fundamental moral theology.

Originally published by Kyle Chamberlin at newsinfo.nd.edu on March 19, 2007.