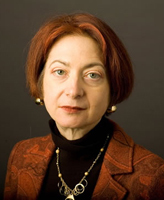 Jean Porter, John A. O’Brien Professor of Theology at the University of Notre Dame, has been named a Catholic Press Association Book Award winner for 2011.

Porter’s Ministers of the Law: A Natural Law Theology of Legal Authority, won third place in the association’s contest for best theology book of the year.

In announcing the award, the CPA said Porter’s book “revives the classical philosophy of natural law and analyzes its relationship with and its application to political and legal life in the modern democratic state.

“It is a daring and imposing accomplishment.”

In addition to her work in the Department of Theology, Porter is a member of the research faculty in the College of Arts and Letters’ Gender Studies Program and a fellow in the University’s Medieval Institute.

Her previous books include Nature as Reason: A Thomistic Theory of Natural Law (Eerdmans, 2005), which develops a contemporary theological account of natural law, and Natural and Divine Law: Reclaiming the Tradition for Christian Ethics (Eerdmans, 1999), which offers an interpretation of the scholastic concept of natural law.