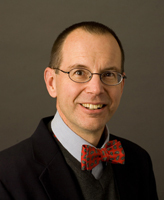 Gary Anderson, Hesburgh Professor of Catholic Theology at the University of Notre Dame, has been named a fellow of the American Academy of Jewish Research (AAJR).

The AAJR is the oldest organization of Judaic scholars in North America, and fellows are nominated and elected by their peers. The group has approximately 100 members in the United States—and Anderson is one of a select few who are not Jewish.

“For me,” Anderson says, “to be treated in such a way by my Jewish colleagues while at a Catholic institution is the highest of honors given the importance I have placed on Jewish studies in my own life and career.”

A member of the faculty in the College of Arts and Letters’ Department of Theology, Anderson specializes in biblical studies, with a focus on the Old Testament and the history of its interpretation, particularly in early Judaism. His most recent books include Sin: A History and The Genesis of Perfection: Adam and Eve in Jewish and Christian Imagination.

“The Bible continues to shape and inform how Jews and Christians understand themselves in the modern world,” he says. “All my historical work is oriented toward that larger issue. I am never satisfied with the question ‘What did this text mean for its author?’ I also want to ask ‘Who are we in light of this text?’ By that, I mean, how does the Bible function for contemporary Jewish and Christian theology?”

Anderson says most of his academic career has involved close work with Jewish sources and Jewish scholars. “I believe that the theological task of interpreting the Bible cannot be done well without a deep and abiding conversation with our Jewish peers.”

Formerly a professor at Harvard University, Anderson says he was initially concerned about how his scholarly focus on Judaism once he had moved to a Catholic university.

“I worried whether my own work in Jewish studies would be taken less seriously,” Anderson says. “I have found that this has not been the case at all. Last year, I was awarded a prestigious Straus-Tikvah Fellowship in Jewish studies at New York University, and the reception of this award is more confirmation that my standing among my Jewish colleagues has, if anything, advanced since coming to this University.

“Jewish scholars in both the United States and in Israel tell me all the time of their high estimation of the Department of Theology at Notre Dame. Many think it is the best place to study Second Temple Judaism outside of Israel. Needles to say, such words of praise for what we are doing here are very gratifying.”