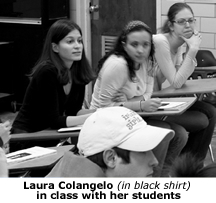 “Ragazzi,” declares Laura Colangelo, calling the students of her Italian theater workshop to order in an O’Shaughnessy Hall classroom at Notre Dame.

The endearing term means “young people,” and it’s funny to hear her use it with authority. Colangelo is the teeniest person in the class, and so young-looking she could easily be taken for a college student.

A 2002 Notre Dame graduate, Colangelo has been teaching Italian at Notre Dame, Saint Mary’s College and at the high school level since then.

The end product of this workshop, born of her own idea as an undergraduate, will be a student production of Carlo Goldoni’s “The Innkeeper” on April 21 and 22 (Saturday and Sunday) in the Regis Philbin Studio Theatre in the DeBartolo Center for the Performing Arts. Performances are at 2:30 and 7:30p.m. Saturday and Sunday. Tickets are $7 for faculty and staff, $6 for seniors and $5 for students.

Colangelo’s presence as head of this workshop is proof that students in the Honors Program, recently renamed the Glynn Family Honors Program, not only leave behind research and new knowledge, but sometimes an academic legacy as well.

In her senior year, Colangelo approached Colleen Ryan-Scheutz, associate professor of Romance languages and literatures, with an idea for her honors thesis: She wanted to create a teaching-and-learning experience that combined her two majors — Italian and theater. She would produce a student play, taking before-and-after measurements of students’ Italian competency.

She envisioned a theater experience involving total immersion. The tasks involved in staging a play — understanding the literature, making costumes, selling tickets, designing the set, direction — would all be done in Italian. (Her honors thesis also was written in Italian.)

During a recent class, the set directors’ plans launched a lively discussion. The only discernable words to a non-Italian-speaker were the name of the venerable talk show host for whom the performance venue is named, and an occasional English reference to “black box,” the Philbin Theatre’s stark black environment.

Colangelo’s theater background is apparent in her teaching. As each class begins, students form a circle and undertake vocal and physical warm-ups. They recite tongue twisters and jump and shake to release their tensions. They pair off and fall backwards into one another’s arms, an exercise that inspires trust.

“Theater is a fantastic venue for students who are learning a language,” says the now-veteran instructor. “Not only do they have to memorize the lines and deal at a close level with the text, they’re also using it on a practical level as they communicate with each other on sets, directions, lighting cues.”

Ryan-Scheutz, a specialist in developing techniques for foreign language instruction, understood the beauty of the theater-Italian blend. Italian language students feel more articulate if they have the sense of inhabiting the body of an Italian. Performing a play — usually a contemporary drama or comedy — allows students to do just that, she explains.

The class attracts more than just Italian majors. Physics major Jason Wittenbach was preparing to study in Rome, and previous theater experience meant he had no stage fright to overcome.

“I knew my Italian was going to be needing quite a bit of practice,” he wrote in an e-mail message from Rome.“When I heard about the Italian theater project, it seemed like the perfect fit – a play with a doable rehearsal schedule and a chance to immerse myself in a situation where I could improve my Italian.”

The experience was perfect: “Having no choice but to listen to and speak Italian for four hours every week was just what I needed to become comfortable using the language,” Wittenbach said. “The play was incredibly fun, and I met so many amazing people on the set.”

Jason being an unfamiliar name for Italians, Wittenberg says he has assumed the Italian name Gaetano, “My old character from the play!”

Students earn two credit-hours for taking the workshop; since each year involves literary analysis of a new work, students can enroll more than once.

“It gives them a chance to study, in depth, a piece of literature. We focus on one play, but we study the author over a time period,” Ryan-Scheutz says.

Normally the text is a modern vignette so that the vocabulary of the play will be useful. This year’s choice acknowledges the 300th anniversary of the birth of Carlo Goldoni, whose accessible comedies about Italian life and manners helped transform that country’s theater.

Even though she has had teaching positions away from South Bend, Colangelo has returned every year to work on the production. And she plans to be here next year, although she expects to leave teaching for graduate school studies.

Originally published by Gail Hinchion Mancini at newsinfo.nd.edu on April 18, 2007.