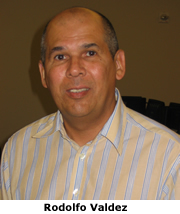 When Rodolfo Valdez moved to the United States from Venezuela 21 years ago, he lost weight because he couldn’t speak English and couldn’t order food. Then, as he became more comfortable with the American lifestyle (obviously a little too comfortable, he concedes), he packed on 20 pounds. He has since figured out where he went wrong, has regained his trim physique, and, as an epidemiologist for the Centers for Disease Control and Prevention (CDC), is trying to stop the increasing problem of Latino obesity.

Weight gain eventually affects many Latino immigrants who, for the most part, eat healthier and get more exercise before coming to the U.S. than after. The problem, which can lead to chronic illnesses like diabetes and heart disease, is being studied by Valdez and other public health practitioners and faculty from around the country. Experts visited Notre Dame this summer to participate in an Institute for Latino Studies (ILS) workshop titled “Latino Obesity: Using Research for Understanding and Action” in an effort to address the social, cultural and economic factors associated with obesity among Latinos.

According to the CDC, overweight and obesity in the U.S. occur at higher rates in racial and ethnic minority populations, and those of low socioeconomic status within those groups are most vulnerable to obesity. Its related diseases, including diabetes, hypertension, cancer and heart disease, also are found in higher rates among minorities.

Valdez, along with experts from the Pan American Health Organization, various community-based health groups and higher education, discussed the epidemiology of obesity across the U.S. and within Latino communities and collaborated on research methods, data sources and intervention models. He says much of the problem can be blamed on a “health transition.”

“First-generation Latinos just arriving in the U.S. are not typically obese,” Valdez says. “Actually, they are leaner than people who have been living here for some time because they eat healthier and get more exercise, but as they stay here longer they adopt the customs here, perhaps buying their first car, watching television and playing video games, and they start gaining weight. Third-generation Latinos begin to become healthier because they become more educated about why they got fat, why it’s not good and what they need to do about it.”

In Chicago, where the ILS conducts much of its research on the city’s growing Latino population, Puerto Rican native Aida Giachello is founder and director of the Midwest Latino Health Research, Training, and Policy Center at the University of Illinois at Chicago. She also works with the center’s diabetes community action coalition.

“The coalition promotes healthy eating and diabetes education through classes, health fairs, media campaigns and newsletters,” she explains. “We also work with restaurants and grocery stores to make sure they offer healthier options for their customers.”

The job is fraught with frustrations for Giachello and her colleagues.

“Many people are in denial about having diabetes, believing it’s a temporary condition or that they only have `a touch’ of it,” she says. “Also, losing weight isn’t easy and it’s difficult to teach people to change their lifestyles. Those who do want to eat more fruits and vegetables can’t afford them, and many who need help are illiterate, forcing the coalition to provide time-consuming one-on-one counseling. Also, there’s a constant lack of funding.”

“With all five workshops the objectives have been to develop the capacity to effectively use available data from the Census Bureau and other sources to conduct research on Latinos,” says Timothy Ready, ILS research director. “This year, with support from the U.S. Department of Health and Human Services’ Office of Minority Health, we’re working to help alleviate the problem through culturally informed and well-researched interventions to affect eating patterns and physical activity, ultimately improving the fitness and health of Latinos and reversing the trend toward obesity and its many related health problems.”

As some of the country’s leading epidemiologists consider the information generated through the workshop, they’re drafting research and grant proposals to influence policy work and program planning.

At Notre Dame, new opportunities are emerging as well.

“We are becoming more involved in addressing the health needs of Latino communities,” Ready says. “We are expanding the ways in which the University is responsive to the needs and interests of diverse communities.”