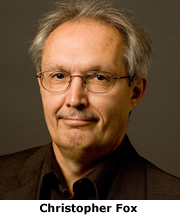 Irish America magazine’s Top 100 Awards Ceremony, held last month in New York City at Broadway’s Hilton Theatre, was a glitzy affair, complete with a flashbulb-popping cocktail reception and selected musical numbers from “The Pirate Queen” performed on stage. Notre Dame’s chairman emeritus Donald Keough was there, as were Senator Hillary Rodham Clinton and her husband, the former president. Ireland’s Ambassador Noel Fahey and the actors Liam Neeson and Gabriel Byrne also were among the guests.

But none of the “Irish 100” honorees could have enjoyed himself quite as much as Christopher Fox, professor of English and director of Notre Dame’s Keough-Naughton Institute for Irish Studies. Simultaneously enjoying and laughing at his recently acquired status as a prominent Irish American, Fox admits that he knows of only one 18th century Irish ancestor, adding, in an enigmatic and unmistakably Irish fashion, that he is “proud of” this anonymous relative.

In any case, Fox has much to be proud of in his own right, and Irish Americans have ample reasons for honoring him. Salient among these is the indispensable role Fox has played in the establishment and flourishing of what is arguably the world’s foremost center of Irish studies, the Keough-Naughton Institute at Notre Dame.

Fox, who joined the Notre Dame English faculty in 1986, had been drawn into Irish studies through his studies of 18th century English and Irish literature, and particularly of Jonathan Swift. Already prominent in the field by the time he became chair of Notre Dame’s English department in 1992, he became increasingly impatient with the anemic condition of Irish studies in a University with ancient and durable roots in Ireland and Irish America.

A congenial and ebullient man who is not shy when it comes to sharing his impatience with others, Fox soon found a sympathetic hearer in Rev. Patrick Sullivan, C.S.C., a Holy Cross priest and former sociology faculty member at Notre Dame, who broached the subject with his friend, Donald Keough, then president and chief operating officer of The Coca-Cola Company. Keough and his wife, Marilyn, eager to make “an important contribution to Notre Dame and to Ireland,” generously funded the establishment of the Institute, and a new chapter in the history of Notre Dame and Irish America began.

His scholarship had brought Fox into a friendship with the stellar Irish scholar and writer Seamus Deane, who had taught at Notre Dame as a Fulbright scholar in the 1970s. Convinced, as one faculty member said, that “if Seamus Deane went to Gary, it would become a world center for Irish studies,” Fox persuaded him to come to Notre Dame in 1992. According to Niall O’Dowd, founder of Irish America Magazine and Irish Voice newspaper in New York, “Deane’s assignment stunned the Irish academic world. It was clear that Keough and Notre Dame meant business.”

The rest is pleasant history: the Institute has become a world leader in the field of Irish studies during the last 15 years, bringing to campus leading Irish scholars of North America and Europe. In addition to a graduate program in which 22 students are pursuing advanced degrees, it offers one of the most popular undergraduate programs at the University, enrolling 908 Notre Dame students in Irish studies courses last year, 297 of them in Irish language courses.More than 60 students spent this year in Dublin studying at Trinity College or University College Dublin under the auspices of the institute’s Keough-Naughton Notre Dame Centre, a restored 18th-century Georgian building which was once the home of the legendary Irish politician, Daniel O’Connell.

As pleased as Fox is by his most recent honor, and as justifiably proud as he is of the Keough-Naughton Institute, he longs for more time to teach and study. Nevertheless, he is afflicted by an administrative talent which the Notre Dame administration isevidently unwilling to forgo. And always that impatience: He wants a new archeology of Ireland program to be further developed and supported, and programs in the social sciences and Irish American history, and what about Irish music?

He really has only himself to blame.

Originally published by Michael O. Garvey at newsinfo.nd.edu on April 13, 2007.