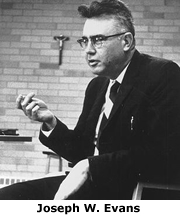 It’s an odd little monument, as Notre Dame monuments go, that shrunken monolith of concrete among the park benches just west of Malloy Hall’s Chapel of Mary, Seat of Wisdom.

Affixed to its oblique cap, like a missal atop a lectern, is a bronze plaque identifying the area as the “Joseph W. Evans Memorial Crossroads.” The plaque is inscribed “The Just Man Justices,” a quotation from one of Gerard Manley Hopkins’ most eccentric and numinous poems, and the just man it memorializes is celebrated as “philosopher, teacher and friend.”

Professor Evans, who taught philosophy and directed Notre Dame’s Jacques Maritain Center from 1957 until his death in 1979, was all of those things. He also was an archangelic presence on the Notre Dame campus, the very mention of whose name will bring an affectionate smile to the faces of thousands of men and women he taught, counseled, and teased during his long tenure here. For many of those years, the true “crossroads” where Joe Evans would encounter, cheerfully chat with and gently advise them was the intersection of several sidewalks between the LaFortune Student Center and the Hayes-Healy Center.

But his crossroads were nothing if not moveable, and his customary roost was a comfortable and very hospitable office on the seventh floor of what is now the Hesburgh Library in what is still the Jacques Maritain Center.

A cozy transluscence seemed always to fill this pleasantly cluttered sanctuary, thick with books and stacks of manuscripts, its walls swathed haphazardly with prints by Chagall and Rouault. The surroundings reflected and magnified an already large personality in which merriment and solemnity were perfectly balanced and uniquely blended. A just man justices indeed.

It was here that Evans entertained visitors from all regions, generations and walks of life, here that he translated numerous works of Maritain into English, and here that he met the classes of his most fortunate students.

One of these, Basic Concepts of Political Philosophy, began with the arresting observation that “Philosophy considers politics. Philosophy considers anything at all: It considers a star, a movie star, a Telstar or even, perhaps, `someone crazy enough to give me a daisy.’” As with all his utterances, the words were delivered in a sort of hieratic chant, slowly, methodically, and in syllables so distinct that he might have been engraving them, speaking each aloud as he worked.

As they all now know, Evans was, indeed, engraving those words in the hearts and imaginations of his students, and his inscriptive manner of speaking could make an aphorism of Thomas Aquinas as new and intriguing to them as the then-popular sitar music of Ravi Shankar. He was a Thomist right down to his toenails, and would quote from the Angelic Doctor, smiling as he shared the words he himself might have written. “Art is the perfection of the thing made,” he would intone, proferring each word and savoring its every etymological nuance as if it were a special gift, which, of course, he believed it was. He knew that all words derived from the Word, the Word made flesh, the greatest gift.

Evans’ own special gift was the grace with which he welcomed all who wished to linger with him, to “ponder” (another word he loved) at the intersection of faith, reason, intellect, prayer, wonder, work and delight.

It’s appropriate that he and his witness be remembered with a crossroads.

Originally published by Michael O. Garvey at newsinfo.nd.edu on June 27, 2007.