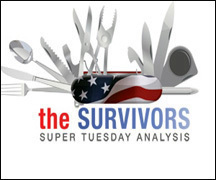 Three University of Notre Dame political experts will discuss the results of the Super Tuesday primary elections and explore the ever-changing presidential campaign terrain at 7:30p.m. Wednesday (Feb. 6) in the Hammes Student Lounge of the Coleman-Morse Center on campus.

Sponsored by Notre Dame’s Center for Social Concerns’ NDVOTES’08 campaign, the event is free and open to the public.

The panel discussion, titled “The Survivors: Super Tuesday and Early Primaries Analysis,” will feature Jack Colwell, a faculty member in the Department of American Studies and a political analyst for the South Bend Tribune; and Darren Davis and Dianne Pinderhughes, both professors of political science, who will examine the top tier of “surviving” presidential candidates following Super Tuesday primaries and earlier caucuses and elections in which voters in some 30 states will have cast their ballots.

NDVotes’08 is a nonpartisan educational campaign of the Center for Social Concerns aimed to encourage and organize voter registration, education and mobilization efforts and events in order to increase the overall civic participation and informed political engagement of students at Notre Dame.

More information is available on the Web at http://socialconcerns.nd.edu/mission/justice_ed/justice.shtml..

Originally published by Julie Hail Flory at newsinfo.nd.edu on February 04, 2008.