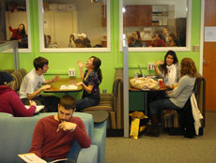 Gone are the days of students learning foreign languages by donning clunky headsets and repeating phrases in a booth at the campus language lab.

The University of Notre Dame’s new high-tech home for language and cultural study, the Center for the Study of Languages and Cultures (CSLC) located in 329 DeBartolo Hall, is promoting communication and interaction through a variety of innovative methods designed to appeal to students.

“The most exciting thing we’re working on that no other language center in the country is doing is creating an Internet window,” said CSLC director Lance Askildson. “It’s a live, high-definition video connection that will run 24 hours a day, allowing students here in the center to have conversations any time they choose with students at universities in Asia, Europe and South America.”

Having worked closely with the Office of Information Technologies to develop the technology, Askildson now is coordinating with Notre Dame’s study abroad affiliates and plans to launch a pilot this semester in Angers, France. Eventually, he wants Internet windows in all 20 countries in which the University supports a language program.

“This technology has never been used in language learning and never in the way that we’re proposing,” Askildson said. “High definition really makes a difference when you’re trying to learn a language and trying to have a cross-cultural, cross-linguistic interaction. You need to be able to see articulation movements of the mouth and facial expressions, and sound quality is very important.”

Formerly the assistant director of the Center for English as a Second Language at the University of Arizona, Askildson specializes in second language acquisition and was attracted to Notre Dame because of the innovative nature of the new center and its wide-ranging support on campus due to a broader push for internationalism.

“We hope the center accelerates our goal to become one of the very best places in the country for language acquisition and cross-cultural engagement,” said John McGreevy, I.A. O’Shaughnessy Dean of the College of Arts and Letters. “At a moment when other universities are cutting back on language instruction, Notre Dame is expanding, and we’ve seen recent enrollment increases in almost every language, with Arabic and Chinese enrollments exploding.”

All of the existing resources and film collections from the language departments and the library are being transferred to the CSLC, which now offers at least one foreign language television channel in each language taught on campus. More options will be available soon via satellite.

One of the most intriguing aspects of the new center, however, is something students can access without actually walking through its doors. The new Web site ( http://cslc.nd.edu/ ) is all about community and interaction and serves as a gateway to 14 “language communities” that house reference materials, resources and information on upcoming events, and soon will offer a series of interactive features.

Synchronous chat and video conferencing features will allow quick access to peer tutors or the CSLC desk. Blogs moderated by leaders of student language groups will promote discussion on campus, cultural and societal issues. There will be a forum for study abroad returnees to share their experiences, and wikis will serve as “how-to” guides for each language group.

“The student-edited wikis, I think, are the most interesting feature,” Askildson said. “These will offer tips on how to survive, study and succeed in each language level. No faculty will be named, as it won’t be class-specific, but it will provide a forum to help students master language study from a student perspective.”

Askildson, a member of the Computer Assisted Language Learning Consortium, which is the largest language learning group in the world, is most excited about the center’s potential.

“We’re still in development, but there are very few post-secondary institutions that provide the level of support for language and cultural studies that Notre Dame does,” he said. “I believe we’re one of the best language centers in the country, especially if you consider where we’re going.”