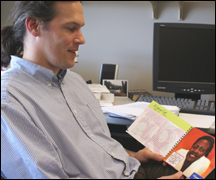 How many people read a student research paper? There’s the student writer. Maybe a friend offers to proofread it. Finally, there’s the professor who assigned the project. Not a very large audience.

The exception is research done by students in anthropologist Daniel Lende’s class, “Alcohol and Drugs: The Anthropology of Substance Use and Abuse.” By now, their research has been viewed some 2,600 times over the Internet.

Lende required student teams to communicate their work in two forums—oral presentations to the class and a summary of their work written for a blog calledNeuroanthropology. Created by Lende and former Notre Dame anthropologist Greg Downey, the site generally draws professionals who seek a better integration between the brain sciences and anthropology, psychology, sociology and philosophy.

Within the first week of posting all eight projects on the blog, Lende not only had seen his students reach thousands of viewers, but two projects had been picked up and posted on other blogs. Far from being personal diaries on campus parties, the projects present measured analysis. Topics include how brain imaging measures the role of the brain in addiction, the genetic and environmental bases of addiction, the role gender plays in addiction, and when varying cultures introduce their children to alcohol. (All can be seen at https://neuroanthropology.wordpress.com/category/addiction.).)

Alcohol addiction provides a perfect example of the need for integration between the brain sciences and the social sciences. Recent research defined the neurology of addiction, but that information did little to put addiction in a social context.

“Addiction is not a brain disease,” says Lende. “It’s a people problem.”

Urging students to communicate through a blog is only the latest in Lende’s efforts to create student projects that “get students to reach beyond themselves.”

A previous class worked with Imani Unidad, an organization dedicated to increasing HIV/AIDS awareness in the African-American community. The class produced a pamphlet that addressed local alcoholism treatment options in recognition of the fact that drinking and alcoholism can increase sexual risk taking. Another class produced “Underneath It All,” a colorful guide used by South Bend’s Memorial Hospital that describes how women have used humor in their recovery from breast cancer.

But by encouraging blogging—during the semester, students also blogged among themselves—Lende’s assignment acknowledges that technological communication is increasingly more relevant to students than are books and papers. The Internet is a neuroanthropological riddle all its own.

Lende’s motivation to prepare students as better scholar-communicators involves a glance to the past as well as the future. And in the latter case, he is his own case study.

As an anthropology major at Harvard, Lende recalls, his senior thesis project was as a solitary march toward a 150-page paper on human altruism. Only after he earned his doctorate and undertook a post-doctorate fellowship did a professor gently suggest that Lende needed to learn the conventions of writing for publication. Today, his undergraduates craft their papers in a flow typical of professional journals. In blogging, he encourages them to abandon the scholarly voice they adopt to impress faculty in favor of a tone that is friendly, accessible and direct.

Even one of his community partners helped shape Lende’s thoughts about people-friendly knowledge. After finishing a community-based learning project with Imani Unidad, Lende presented the director with a copy of the summary of their work—in classic term paper form. “She said ‘Oh. That’s nice,’” he recalls.

After that, he had students create the pamphlet.

Originally published by Gail Hinchion Mancini at newsinfo.nd.edu on May 28, 2008.