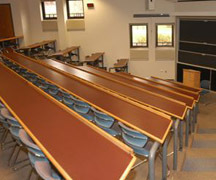 Nineteen University of Notre Dame faculty members have received teaching excellence awards on the strength of faculty and student nominations, and three faculty with strong dedication to student advising also are being honored.

The awards are presented by the Office of the Provost, but recipients are selected through a process that includes peer and student nominations.

* Cornelius O’Boyle, associate director of the London Undergraduate Program, has been named recipient of the International and Off-Campus Teaching Award. The award recognizes the pedagogical excellence of a faculty member who teaches for the University’s abroad or off-campus programs administered by the Office of International Studies.

The selection process for rewarding teaching excellence was revised by the Office of the Provost last year to welcome nominations from students. The undergraduate teaching award is supported by a gift from the late Father Joyce’s classmates in the Class of 1937. This is the second year that advisors and student mentors are being honored through an award supported by the Julia Stearns Dockweiler Charitable Foundation.

Originally published by Gail Hinchion Mancini at newsinfo.nd.edu on May 01, 2008.