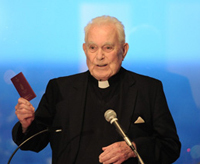 Despite the fact that four Irishmen were among the seven brothers who arrived in northern Indiana with him in 1842, Notre Dame’s founder, Rev. Edward Sorin, C.S.C., had misgivings about the Irish, and struggled, with notable lack of success, to repress celebrations of St. Patrick’s feast day during Notre Dame’s early years.

That irony in Notre Dame’s history became all the more agreeably pronounced when offset by the glowing bonhomie of a dinner reception for Enda Kenny, Taoiseach (or prime minister) of Ireland, on the 14th floor of the University’s Hesburgh Library this St. Patrick’s Day.

Shortly before the dinner, Kenny, meeting privately with Sorin’s successor, Rev. Theodore M. Hesburgh, C.S.C., had given Notre Dame’s 94-year-old president emeritus an Irish passport, officially recognizing him as a citizen of Poblacht na hÉireann, the Republic of Ireland.

For the Taoiseach, the honoring of Hesburgh was part of an American tour that included marching in Chicago’s St. Patrick’s Day parade, a visit to New York City and a meeting with President Barack Obama in the White House. He had been welcomed to Notre Dame by Hesburgh’s successor, Rev. John I Jenkins, C.S.C., whose remarks included a playful but accurate exegesis of Notre Dame’s familiar “Fighting Irish” nickname. While the phrase was “originally intended as a slur in the 1930s to indicate a University of rowdy, unruly, drunken Irishmen,” he explained, the University soon “embraced that name, and transformed it to represent a real resilience.”

“Today, at Notre Dame, we’re of Asian, African, European, and Latino ancestry, but we’re all Fighting Irish and very proud of that,” Jenkins said. 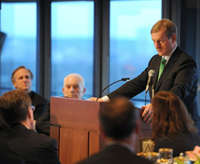 Referring affectionately to “Father Ted,” the prime minister pronounced himself “proud, on behalf of all the people of Ireland, to shake his hand,” and noted that this evening at Notre Dame was an occasion to marvel that “there is no such thing as an isolated community anymore.” He spoke of Hesburgh’s five million fellow Irish citizens, and how they lived in a motherland for some 70 million Irish men and women worldwide in a diaspora whose vitality and loyalty so impressed China’s president, Hu Jintao, that he recently asked Kenny, “How do you build such a sense of community?”

As if to emphasize that sense, Hesburgh, after apologizing for his own difficulty in pronouncing Kenny’s title (the Irish word for “chief”), waving his new passport and thanking the Taoiseach, assured him that “you’re always welcome here.” He went on to extol “the vital link between Notre Dame and that wonderful land from which my grandfather, Martin Murphy, emigrated in 1857 when he was 18 months old.” Echoing the Taoiseach’s earlier remark that Notre Dame was “at the center of the soul of what it is to be Irish-American,” he described Ireland as an “absolutely essential part of our history” and the feast day of St. Patrick as a time “that we can all be Irish for a while, even though we may be half or a quarter something else.”

In the evening’s concluding remarks, Jenkins expressed gratitude to the Taoiseach for making Notre Dame’s 2012 St. Patrick’s Day celebration so memorable and for providing once more such agreeable evidence that “the relationship between Notre Dame and Ireland is unique and will remain so.” He then reminded Ireland’s head of state that thousands of Notre Dame’s sons and daughters, along with their football team, would be joining him in Dublin’s new Aviva Stadium Sept. 1 for a game with Navy.

“See you in September,” he told the Taoiseach. “Go Irish!”