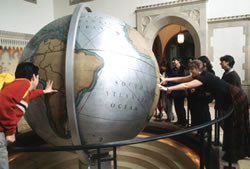 They come to Notre Dame from all corners of the world, representing a diverse array of backgrounds, many leaving war-torn and politically troubled homelands, all united in a common quest – to somehow grasp and administer the elusive notion of peace on earth.

Each class that enters the master’s program at the University’s Kroc Institute for International Peace Studies is unique, to say the least. Between 15 and 20 students from a wide range of geographic, cultural and religious backgrounds are selected each year to come to Notre Dame, where they study, socialize and live together in a “miniature United Nations” of sort.

The 2006 graduating class, however, has an additional distinction – it will be the first to complete the Kroc Institute’s newly expanded two-year program, which was restructured in 2004 to incorporate a field study component that sends students across the globe to experience first-hand the realities and practicalities of peace-building in action, then brings them back to campus to share tales from the field with their classmates.

Burcu Mnyas, who came to Notre Dame from her native Turkey, completed her field studies last July through December in Phnom Penh, Cambodia, where she worked for Catholic Relief Services to implement a peacebuilding project titled “Genocide in the Mind of the Cambodian Youth.”

“It was a real school in itself,” Mnyas recalls. “It showed me about the different layers of situations that we just simply have a hard time seeing being so far away and in a school environment reading about these things. The distinction between victims and perpetrators, for example, is not as black and white as we think it is. It’s fascinating to see how people deal with these things.”

Under the new program, students now spend one year taking courses at Notre Dame, followed by six months working for non-governmental organizations in one of six field locations (currently two in Africa, two in Southeast Asia, one in the Middle East and one in the United States), then six months back on campus to complete a capstone course and write a master’s thesis, usually on a topic related to their field studies.

“Before the expansion we were, in essence, trying to pack two years’ worth of peace studies into one year, a process that had students feeling overwhelmed and the program ‘creeping’ into their summers,” explains Martha Merritt, associate director of the Kroc Institute, who oversees the field studies component. “Once we had the resources and faculty, the two-year program was a natural.”

Those resources came largely in the form of a $50 million gift (the largest in University history) from the estate of the institute’s benefactor, Joan B. Kroc, who died in October 2003. Although the expansion was always part of the program’s master plan, the bequest allowed the institute to implement the change sooner than originally hoped.

Students like Diana Batchelor, an Oxford University graduate from the United Kingdom who also will receive her master’s degree in May, couldn’t be happier with the timing. Her field studies took her to South Africa for a stint with the Institute for Justice and Reconciliation researching traditional African methods of peacebuilding.

“I loved it. Just being in the country was a learning experience,” Batchelor reflects. “It’s invaluable. Not only to leave Notre Dame and go somewhere and apply some of the things we’ve been learning, but, more importantly, to come back and discuss it with classmates.”

Students find the post-field studies period especially relevant because it places their work in the classroom into a practical, personal context.

“We’ve learned lots from each other about the practicalities of what it takes to run an organization,” Batchelor says. “The fact that we live together means we can exchange stories over the dinner table. We talk about this person who we met, or this conversation that we had, and have some philosophical discussions about what we’re doing as well.”

Merritt says prospective students already are mentioning the opportunity to complete field experience as a reason why they are applying to the master’s program, and she points out another perk of the two-year structure.

“A happy additional benefit of the field experience is attractiveness of our graduates on the job market,” she explains. “Already one of our graduates is employed by her host organization and a second is a finalist for a position.”

Both Mnyas and Batchelor plan to embark on careers in peacebuilding upon graduation in May, likely continuing their travels to troubled and recovering nations and communities.
In the meantime, Mnyas has found a place where she’s quite content to remain.

“I’m at home at the peace institute,” she says.

Originally published by Julie Hail Flory at newsinfo.nd.edu on April 24, 2006.