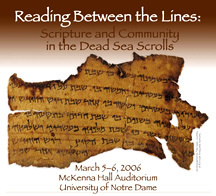 “Reading Between the Lines: Scripture and Community in the Dead Sea Scrolls” is the title of a symposium Sunday and Monday (March 5 and 6) in the auditorium of McKenna Hall at the University of Notre Dame. Sponsored by the Department of Theology and the Institute for Scholarship in the Liberal Arts, the presentations are free and open to the public.

Held in honor of James C. VanderKam, Notre Dame’s John A. O’Brien Professor of Theology and one of the world’s leading scholars of the scrolls, the symposium will examine current debates in the study of the Dead Sea Scrolls and will include presentations by national and international scholars.

VanderKam and fellow Notre Dame theologian Eugene C. Ulrich are principal editors on the official translation team for the scrolls, and presented the first microfiche edition of the 2,000-year-old documents at an international conference held on campus in 1993. VanderKam and Ulrich both have authored numerous books on the Dead Sea Scrolls and have received international recognition for their research and scholarship.

The keynote address for the symposium is titled “A Holy House for Aaron: The Aims of Yahad,” and will be delivered by John J. Collins, Holmes Professor of Old Testament Criticism and Interpretation at Yale University, at 8p.m. Sunday.

Originally published by Susan Guibert at newsinfo.nd.edu on February 27, 2006.