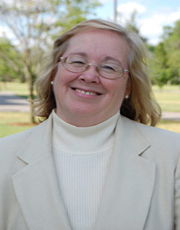 Susan Ohmer, assistant provost and William T. and Helen Kuhn Carey Associate Professor of Modern Communication at the University of Notre Dame, has been appointed interim director of Hesburgh Libraries by University Provost Thomas G. Burish, effective May 19. The University is conducting a national search for a successor to Jennifer Younger, who is stepping down at the end of the academic year after 13 years as the Edward H. Arnold Director of Hesburgh Libraries.

As assistant provost, Ohmer is responsible for coordinating efforts to recruit and retain women faculty and for oversight of the libraries and Notre Dame Press, and she serves as the provost’s liaison to the Early Childhood Development Center. Since 2007, she has led the Committee on Women Faculty and Students, which considers policies, practices, and the general environment of the University as they relate to women faculty and students.

A member of the Notre Dame faculty since 1998, Ohmer previously taught at the College of Staten Island and the University of Michigan. She teaches courses in film and television in U.S. culture, and her research focuses on the history and use of market research in media organizations. She has received several grants to support her research, including visiting fellowships to the Lilly Library at Indiana University, the Hartman Collection at Duke University, and the Harry Ransom Humanities Research Center at the University of Texas.

Originally published by at newsinfo.nd.edu on April 07, 2010.