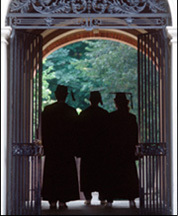 When it comes to job satisfaction, the University of Notre Dame is hitting many of the right notes among its junior faculty members, according to a recent survey that gauges the opinions of tenure-track scholars about work environments at some 80 institutions of higher learning.

Released by the Harvard University-based Collaborative on Academic Careers in Higher Education (COACHE), the report, “Top Academic Workplaces 2005-2007,” is based on a survey of about 7,000 junior faculty from 78 colleges and universities who rated their satisfaction level in such categories as the tenure process, work and family balance and collegiality.

“At Notre Dame, we seek to provide faculty with an exceptional environment in which to grow as scholars and teachers,” said Thomas G. Burish, Notre Dame’s provost. “It is reassuring to have, in this report, an indication that we are on the right track. I am very grateful to the deans, department chairs, and other academic leaders and staff who make this such a wonderful place for faculty to work.”

Top finishers in the COACHE survey were Stanford and Brown Universities, both of which achieved exemplar status in eight of the 12 categories in the report. Other institutions that fared well include Duke and Dartmouth Universities, each with six exemplary ratings. A summary of the report is available on the Web at http://gseacademic.harvard.edu/~coache/reports/20071205.html .

Based at the Harvard Graduate School of Education and supported by member institutions, COACHE aims to gather the peer diagnostic data academic administrators need to recruit, retain and develop the cohort most critical to the long-term future of their institutions.

Originally published by Julie Hail Flory at newsinfo.nd.edu on December 21, 2007.