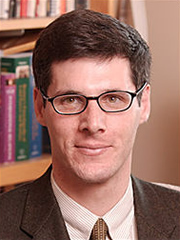 A new article by political scientists Keir A. Lieber of the University of Notre Dame and Daryl G. Press of the University of Pennsylvania presents a sobering analysis of several recent strategic nuclear developments. Titled, “The Rise of U.S. Nuclear Primacy,” the article appears in the just released March/April edition of the prestigious journal Foreign Affairs.

Of late, political leaders and the news media have focused on the dangers posed by nuclear proliferation and nuclear terrorism. However, Lieber and Press point out that relationships involving the traditional major nuclear-armed powers reveal potentially more troubling and perilous developments.

For much of the Cold War period, the world’s safety depended on a nuclear paradox known as mutual assured destruction (MAD).

“For almost half a century, the world’s most powerful nuclear states were locked in the military stalemate known as MAD,” Lieber said. “By the early 1960s, the nuclear arsenals of the United States and the Soviet Union had grown so large and sophisticated that neither country could entirely destroy the other’s retaliatory force by launching first, even with a surprise attack. Nuclear war was therefore tantamount to committing suicide.”

Ironically, many scholars and policy analysts believed MAD made the world relatively stable and peaceful by discouraging the use of nuclear threats to resolve disputes and restraining the superpowers’ behavior.

“It’s not mad, it’s logical,” Robert McNamara, secretary of defense in the Kennedy and Johnson administrations, once said.

Lieber and Press indicate, however, that the end of the age of MAD is upon us because the United States is on the verge of attaining nuclear primacy. For the first time in almost 50 years, the United States could conceivably destroy the long-range nuclear arsenals of Russia or China with a nuclear attack. Although an actual U.S. attack is unlikely, American’s nuclear dominance will dramatically shape international relations for years to come.

The authors point out that Russia’s nuclear capabilities have declined precipitously. Compared to 1990, it has 55 percent fewer intercontinental ballistic missiles, 39 percent fewer strategic bombers, and 80 percent fewer ballistic-missile submarines. The Russian government has publicly stated that its nuclear arsenal will decline an additional 35 percent, but many experts believe that it could shrink even more.

Financial constrains have resulted in an even steeper decline in the quality of the Russian nuclear arsenal.

The odds that China could emerge as a nuclear competitor of the United States are slim, according to the authors, because of the slow pace of modernization in the nuclear forces of that country. In fact, China’s nuclear vulnerabilities are more pronounced than Russia’s.

“Unless Washington’s policies change or Moscow and Beijing take steps to increase the size and readiness of their forces, Russia and China ? and the rest of the world ? will live in the shadow of U.S. nuclear primacy for many years to come,” Lieber said.

Lieber and Press note that one’s views on the implications of U.S. nuclear primacy will depend on one’s theoretical perspective.

“Hawks, who believe that the United States is a benevolent force in the world, will welcome the new nuclear era because they trust that U.S. dominance in both conventional and nuclear weapons will help deter aggression by other countries,” the authors said.

“Doves,” on the other hand, will be less sanguine.

“Doves, who oppose using nuclear threats to coerce other states and fear an emboldened and unconstrained United States, will worry,” according to Lieber and Press. “They fear nuclear primacy might lure Washington into more aggressive behavior, especially when combined with U.S. dominance in so many other dimensions of national power.”

U.S. nuclear primacy also will be a cause of concern for a third group: “Owls.”

“Owls, who worry about the possibility of inadvertent conflict, will fret that U.S. nuclear primacy could prompt other nuclear powers to adopt strategic postures, such as giving control of nuclear weapons to lower-level commanders, which would make an unauthorized nuclear strike more likely.

“Ultimately, the wisdom of pursuing nuclear primacy must be evaluated in the context of the United States’ foreign policy goals,” Lieber and Press conclude.

Lieber, who joined the Notre Dame faculty in 2001, is the author of “War and the Engineers: The Primacy of Politics over Technology.”

Originally published by William G. Gilroy at newsinfo.nd.edu on March 02, 2006.