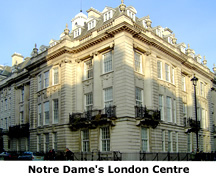 The University of Notre Dame has the sixth-highest percentage of students participating in study abroad programs among American research universities, according to a recently released report from the Institute of International Education (IIE).

In 2004-05, the most recent academic year for which statistics are available, 57.9 percent of Notre Dame students had participated in study programs in other countries. Yeshiva University in New York ranked first in the report with a 76.7 percent participation rate.

“In this time of geopolitical and economic uncertainty, it is heartening to see that Notre Dame students remain firm in their resolve to study abroad,” said Julia Douthwaite, Notre Dame’s assistant provost for international studies. “We are delighted with the ongoing high rate of interest in international study, and chalk it up to outstanding instruction in languages and area studies curriculum, and well-structured programs that allow students to receive credit and continue progress toward graduation while studying in one of 19 countries worldwide.”

“International study should be a part of every student’s education,” said Allan E. Goodman, president and chief executive officer of the IIE. “American colleges areproviding more opportunities for students to have an international experience and are beginning to address some of the barriers to participation in study abroad, in order to prepare their students to be global citizens.”

While Western Europe traditionally is the most popular destination for American college students, there were major increases this year for other non-traditional destinations, including a 35 percent increase in students going to China (now the eighth leading host destination for American students and the only Asian country in the top 10). There also was a significant increase in the number of students going to South American countries, including Argentina, Brazil and Chile.

The leading destination for Notre Dame students is London , with some 130 participating each semester at the University’s facility next to Trafalgar Square.