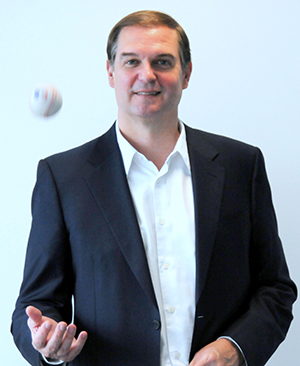 When first asked if he would work on the Olympics, Chris Renner ’84 jumped at the chance.

The opportunity allowed Renner, who majored in French and economics in Notre Dame’s College of Arts and Letters, to combine his love of sports with his international business experience.

Now based in Paris, Renner is CEO of Helios Partners, a worldwide sports marketing consulting agency. “We work on the commercial side of sports, helping sports events and properties generate revenues,” he said.

Renner has worked on multiple successful Olympic bids and projects for companies including Visa, Samsung, and Volkswagen—firms that want to raise brand awareness by supporting major events such as the FIFA World Cup.

He credits his Notre Dame liberal arts education with giving him the tools he needed to accomplish his dream.

On Campus and Overseas

Renner came to Notre Dame with his eye already on a business career abroad. “I had been taking French my whole life, but I knew I needed some practical knowledge of how business operates. I figured economics would give me a broad view,” he said of his decision to double major.

As a sophomore, he chose to study abroad through Notre Dame’s program in Angers, France. “It was 1981 and it certainly opened my eyes to the Cold War,” he said. “There was still the view in the U.S. that going outside of the country was a little risky.”

Renner’s experience belied this perception, however. He found instead that studying abroad reinforced his desire to live and work in other countries. He now says, “the best experience I had while at Notre Dame was coming overseas to Angers.”

On campus, he enjoyed the broad array of topics he was able to study through the College of Arts and Letters. English, history, and other liberal arts courses “gave me a range of areas to explore what I could focus on in the future,” Renner said.

Notre Dame’s sports culture also influenced Renner. “Who goes to Notre Dame without being completely surrounded by sports?” he asked.

After graduation, Renner spent three years engaged in social service work in Los Angeles with organizations such as United Way. He says the theology and philosophy he learned at Notre Dame gave him a moral framework that continues to inform his life choices.

As he entered the world of sports marketing, Renner’s work eventually took him from California to Europe and Asia. From 2006 to 2012, Renner and his family lived in Beijing where he worked with sponsors in the lead-up to the 2008 Beijing Olympic Games.

His company, Helios Partners, has also worked with Sochi, Russia, and PyeongChang, South Korea, on their winning bids to host the Winter Olympics.

Months of preparation, Renner said, boil down to a 45-minute pitch that presents the city in a nutshell. The International Olympic Committee (IOC), he noted, is “a pretty tough audience.”

In all of his Olympic work, Renner said he draws on both his economics background and his English classes at Notre Dame, where he learned to simplify and present complex ideas.

No matter where life takes him, Renner said his Notre Dame liberal arts education has been valuable, personally as well as professionally.

For the past two years, he and his wife, along with their three children, have lived in Paris—where he is putting his Notre Dame class on Napoleonic history to good use. He said he gives his kids a history spiel every time they pass Napoleon’s tomb, located near his family’s home.

When hiring new employees, Renner now looks at candidates’ interpersonal and communication skills. The ability to write well is a definite plus in his field, he said. “Putting together good reports is still an important part of what I do.”

Renner encourages all Notre Dame students to consider working abroad—and to spend a year overseas while in school. Exchange programs demystify foreign countries, he said, giving graduates an edge in the job market.

“Looking overseas is an excellent option, because it gives you a chance to differentiate yourself,” Renner said.

“Be a little adventurous!”