There’s nothing quite like dipping one’s foot into the Dead Sea or speaking with participants of the 1965 Freedom Marches to bring perspective to classroom learning.

Over fall break 2012, students in Notre Dame’s College of Arts and Letters took advantage of the week off to expand their educational experiences through travels abroad, around the nation, and across campus. 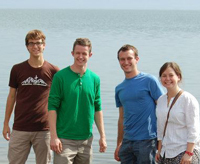 Todd Walatka, an assistant professional specialist in the Department of Theology, took students from his Jewish-Christian Relations after Vatican II course to Notre Dame’s Tantur Institute for Ecumenical Studies, a site in Jerusalem that is within walking distance of Bethlehem and the West Bank.

“This location ‘in-between’ is perfect for the ecumenical and interreligious conversations that Tantur tries to host,” Walatka says.

According to sophomore Hope Feist, the trip did just that.

“It’s no longer random issues that people on the other side of the world are dealing with; these are issues that impact people we met, got to know, and will always remember,” she says. “Being there—walking in all these places, talking to Israelis and Palestinians who live there—will forever change our perspective about events and happenings in the Middle East.” 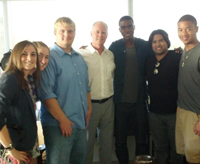 While Walatka’s class examined how thousands of years of history are playing out today, six students from the Department of Film, Television and Theater (FTT) flew to Hollywood to explore what the future might bring.

As participants in the LA Externship program, the students were given the opportunity to meet alumni and others who work in the film and television industries in Los Angeles, says Karen Heisler, the department’s internship coordinator.

The exposure to so many aspects of the entertainment business was eye-opening, says Katie Mattie, a junior FTT major. “It was exciting to come out of each meeting with new career ideas and talk to the other students about them,” she says.

“I’m so much more comfortable with the thought of moving out to L.A. and jumping into film and TV,” Mattie adds. “The connections I made because of the externship are the beginning of a support team for when I take the Cali plunge.” 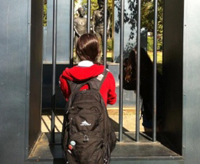 Thanks in part to a Learning Beyond the Classroom grant from the College of Arts and Letters, Associate Professor of English Stuart Greene took his first-year University Seminar class on the road to explore the legacy of the Civil Rights movement in the South.

“The course is about memory—the ways that the Civil Rights Movement has been represented in history and popular culture and the ways that memory contributes to the story a nation tells about itself,” Greene says.

Among other places, the students visited the Southern Poverty Law Center, the 16th Street Baptist Church, and Selma, Ala., where the infamous “Bloody Sunday” protest sparked national attention.

“It gave me a firsthand account to experience the Civil Rights Movement,” first-year student Aliska Berry told The Observer. “The trip made me learn about my ancestors, what they went through, and why I’m here today. It was a humbling experience.”

Afterward, the students wrote about the importance of monuments and memorials and the personal impact the trip had on them. Some were inspired to take action as well: one participant now volunteers at local South Bend schools, while another created an educational website about the Selma march. 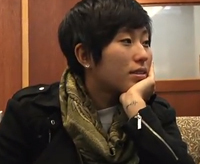 English and FTT major Eileen Chong is one of several students who attended Senior Thesis Camp this fall.

Rather than travel, some Arts and Letters students chose to immerse themselves in research and writing over fall break by participating in the Hesburgh Libraries’ annual Senior Thesis Camp.

Senior Eileen Chong, an English and FTT major working on a novel, found the camp extremely helpful. “Even when I wasn’t writing, my brain was still engaged with reading or creative thinking during the scheduled time period,” she says. “It’s easier to focus when you know there’s a whole group of seniors working alongside you who are also inside on a beautiful fall day.”

Over the course of the week, the seniors met daily in the library to work on their projects and participate in workshops on research, literature reviews, citations, and time and stress management. They also had the opportunity to meet with their faculty advisers and subject librarians and sign up for individual writing and research consultations.

One of her most important takeaways, Chong says, is the discipline of managing your own time and motivation to complete an independent project.

“Nobody hovers over you as you eke out a quota of pages or anything,” she says. “You get what you put into it.”