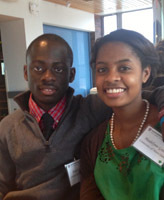 Why do you do what you do? This deceptively simple question faced Notre Dame students Bright Gyamfi and Madelynn Green when they arrived at the 2013 Public Policy and Leadership Conference (PPLC) at Harvard’s Kennedy School of Government this February.

“People gave astounding responses,” says Green, a sophomore political science major. “Some students had been homeless before they went to college, had parents who were illegal immigrants, had suffered and overcome those things. I was really inspired to see why these people were so passionate.”

Each year, PPLC issues invitations to 50 of the most driven and impressive undergraduates out of a pool of almost 500 applicants from some of the best schools in the country. Among those selected were Green and Gyamfi, who spent a weekend at Harvard learning about opportunities in public policy and education, honing their presentation skills, and mingling with politicians.

“The conference aims to attract students from groups under-represented in public policy and international affairs in an effort to increase the diversity of students receiving these professional degrees,” PPLC organizers say. “It will help prepare future leaders for study in public policy, particularly those from historically under-served communities and people of color.”

Gyamfi, a first-year student who plans to major in political science with minors in Africana studies and business economics, says his interest in education policy as well as his academic and career goals compelled him to apply to the conference.

“I want to become an education policy maker,” he says. “I think education is a means of emancipation. It can open doors not just for me but for my whole community. If we can invest in education, it’s proven to change people’s lives.”

Her interest was piqued, Green says, when she participated in a Center for Social Concerns Summer Service Learning Program (SSLP) at Hope Ministries, a living facility for homeless people in South Bend. “Meeting kids and adults there—and getting names and faces to humanize the abstract concepts of ‘poverty’ and ‘homelessness’—inspired me to seek changes in these kids’ lives.”

The two Notre Dame students found further motivation to pursue policy after being with other PPLC participants. “They were so driven to achieve their goals,” says Green.

Just meeting the other students, Gyamfi adds, “I knew that they were going to affect the future.”

The conference featured a series of workshops, panels, and speeches. “We heard talks from people who used to work in the State Department,” says Green. “There was a panel of Harvard Kennedy School professors who talked about their current research and what it means to be involved in public policy.”

Other highlights included resume-building, networking, ethics workshops, a lesson in effective storytelling, and a final dinner during which students had the opportunity to meet a Boston mayoral candidate and other community leaders and scholars.

The conference has already changed the way Green and Gyamfi approach their studies here at Notre Dame—and how they are planning now for their future.

“One thing they emphasized again and again was that you have to make sure your academics are not just average,” Gyamfi says. “After I graduate I hope to go straight to educational policy graduate school. It’s my dream to one day become a professor.”

Adds Green, “They drilled into us: if you’re going to do something, do it. Take advantage of the grants, take advantage of the fellowships. I feel reunited with my passion, and I’m definitely more cognizant of the future. If I hadn’t gone I wouldn’t be thinking about it at all.”

The entire weekend was unforgettable, she says. “It’s a really life-changing experience.”