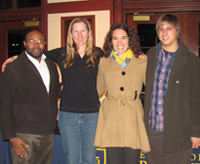 For the past 45 years, Notre Dame students have worked to bring distinguished and forward-thinking writers to campus as part of the annual Notre Dame Literary Festival.

Junior Arnav Dutt describes the festival as “one of Notre Dame’s best-kept secrets and one of its most storied traditions.”

These four authors join a long list of incredible thinkers and writers who have read as part of the festival since its inception as the Sophomore Literary Festival in 1967: Norman Mailer, Kurt Vonnegut, Joseph Heller, Ralph Ellison, Tom Stoppard, Tennessee Williams, Seamus Heaney, Jose Luis Borges, and Margaret Atwood.

The Notre Dame Literary Festival allows students the opportunity to intellectually and creatively engage with some of the most notable writers of our time, whether those writers are young and just beginning their careers or established national award winners. The commitment of the students who run the festival speaks to the University’s dedication to learning and encouraging thought in diverse ways both in and out of the classroom.

The methods of planning the festival have changed since the early years.

“Early on, it was coordinated by a new group of sophomore English majors each year,” Dutt says. “They would go to these people’s houses during breaks, track them down however they could, and ask them to read at Notre Dame.

“The culture has changed, though. Readings are common events at most college campuses. We were one of the earliest places to have a series of readings like this. Now we have to deal with agents and bookings and appearance fees.”

Because of the complications of bringing such notable writers to campus, Butts and Dutt began planning the event last spring, beginning with the selection of authors.

“The biggest challenge was reconciling my wildest dreams to reality,” Butts says. “When I came in I had no idea how much authors would cost or how much any of the other fees would be. We wanted to bring in authors who would interest students but we were faced with the limitations of money and timing. Overall, though, it went smoothly.”

In order to find authors to speak at the festival, the coordinators went through numerous meetings with Department of English and Creative Writing Program faculty members. They were able to put together a list of authors who have written books that would appeal to the Notre Dame audience.

The festival is especially important as the world’s literary culture undergoes significant changes. The students were conscious of this and brought in not only traditional authors but also artists with a strong web presence. For instance, Blake Butler, in addition to having published four books, also edits the popular literature blog “HTML Giant.”

“We picked writers’ writers, that’s for sure,” says Dutt. “The easy part was actually getting the people we wanted to come, which was not what we were expecting. Our entire first round of e-mails was successful.”

This year’s festival consisted of four readings, a panel discussion, and a poetry competition.

“Daniel Borzutsky was the youngest guy there, and the guy who has published the least, but he was speaking to a packed room,” Dutt says.

The authors were also able to interact with students during their time on campus, whether they were speaking to classes or sharing meals with their hosts.

“One of the highlights was meeting all of these amazing authors,” Butts says. “I was so impressed with their intelligence and so honored to be able to welcome them to campus.”

“Meeting the authors was just incredible. It kind of speaks for itself. People capable of writing the way they do are going to be interesting. You’ll double take. You’ll look back on meeting people like that a lot,” he says.

“We were stepping into a great tradition,” Butts says. “We both came in wanting to revive and rejuvenate it. We wanted to reestablish ties with the English and Creative Writing programs. We wanted to host an event students would want to attend.”