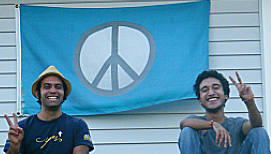 A group of University of Notre Dame seniors are taking their peace studies beyond the classroom with an ongoing experiment in intentional community.

The students who live in the off-campus Peace House each year are generally College of Arts and Letters seniors with a supplementary major or minor in peace studies and an interest in social justice and international issues.

They are perhaps most well-known for organizing dinners where faculty members and students can discuss life and work over a shared meal in an informal setting.

“The big thing about the Peace House is professor dinners,” says Amber Herkey, a recent anthropology and peace studies graduate who lived in the house last year.

“I think the whole idea of creating an informal space where professors and students can continue intellectual discussion, but also bring in life questions, to me represents a well-rounded education and what Notre Dame hopes to provide students,” she says.

The dinners typically occur once every few weeks. Invitations go out to a listserv of 60 to 80 interested students, and typically 20 to 30 people show up. A professor is invited to share the meal and to speak and answer questions afterward.

“They talk about their life and their interests academically, and what this work has to do with social justice issues, a life of faith, a life lived for other people,” says Kristi Haas, who lived with Herkey last year while a senior in the Program of Liberal Studies.

But there’s more to Peace House than professor dinners, says David Rivera, a history and peace studies major who moved in this fall.

“It’s not like we’re just this house that throws events,” he says. “It’s that the people who live in the house make an active decision just to try harder to be there for each other and try to get things done communally.”

The idea is to live simply, Haas says, noting that she and her roommates last year shared a bank account, cooked and ate most meals together, and chose not to have a television in the house, although there were no formal rules to that effect.

“A lot of it is unspoken,” Herkey adds. “We’ll try to have a compost pile so we are not creating so much waste. Recycling is a big issue for us, as is trying to buy local goods or go to the farmers’ market.”

Roman Sanchez, an anthropology and peace studies major who moved into Peace House this fall, says he first found out about it as a freshman involved in the Campus Labor Action Project. The group’s leader at the time was a resident of the house and invited Sanchez to a professor dinner.

“I was new, and I had a certain idea of what college kids do, which is party, party, party,” Sanchez says. “It was really interesting to meet students who were interested on their own time to learn about social justice in all areas of life and being in community and having that bond.”

Rivera, Herkey, and Haas each have similar stories about their first professor dinners as freshmen—and say they realized early on that they wanted to be a part of Peace House.

“They were living together in a way that I had never known before,” Haas says. “It wasn’t the same as what you stereotypically think of as off-campus living. I could tell that the people who lived there were critical thinkers and wanted to use their academics for the common good, and I did too, at least I did after I realized that was a possibility.”

With every new school year, a different group of students moves into the house. New residents Rivera and Sanchez say the professor dinners and involvement in campus activism will continue, as will Peace House’s spirit of hospitality and intentional living.

“If you want the house to be done correctly, it does mean keeping up traditions in some ways,” Rivera says. “It’s a combination of keeping what works and trying to find ways to improve.”

The plan this year is to invite a wider variety of speakers—including local farmers, community activists, and religious leaders—and to partner with other off-campus houses where like-minded students live.

“We really want to add this communal aspect to it and hopefully add a few more houses,” Sanchez says.